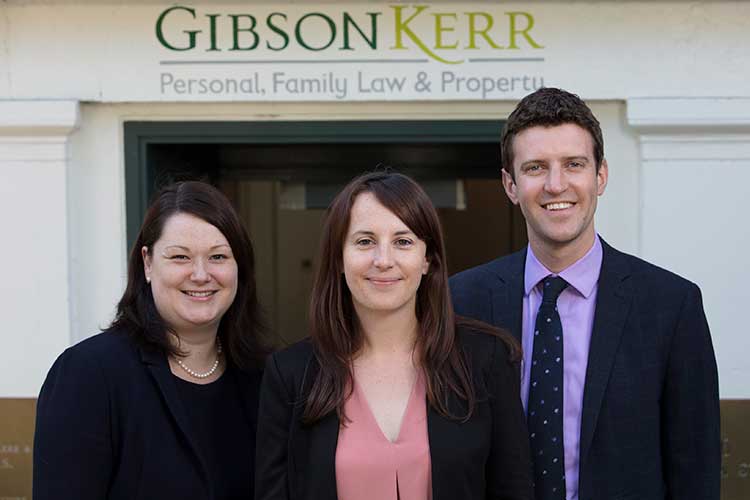 Fiona Rasmusen, who heads up Family Law and acquired the business with her husband Scott in 2005, said: “Stuart and Caroline personify everything we look for within our team.

“They have the work ethic and, perhaps most importantly, the empathy required to flourish in family and personal law.

“I’m thrilled they have been able to come here and develop. This is exactly how we seek to operate, by giving young talent an opportunity and parameters to thrive – and to be duly rewarded.

“In turn, it puts us on a sure footing to recruit again, knowing new team members can learn in the same way that Stuart and Caroline have.”

Stuart joined Gibson Kerr in 2014 from Shepherd and Wedderburn, where he had spent six years, first completing his traineeship and then working in commercial property.

Upon joining Gibson Kerr, Stuart immediately began studying towards the STEP Diploma in Trusts and Estate (Scotland), which he completed in 2016, finishing with distinction and with the highest mark in Scotland for the Trust and Executry Accounting Exam. The qualification makes him a member of the prestigious Society of Trust and Estate Practitioners.

Stuart said: “I had always had an interest in Personal law and I’m very grateful that Gibson Kerr afforded me the chance to work in this area. It was a steep learning curve but to now have progressed to Associate is a really proud moment and reaffirms exactly why I wanted to work in this area of law.

“I’m fortunate to work in such a supportive environment, with access to an experienced expert in Lindsay Maclean (Partner, Head of Personal Law), so my thanks definitely goes to the team around me.”

Caroline MacBeath, who joined as a Solicitor late last year from Legal Services Agency, has earned a speedy promotion to Senior Solicitor, reflecting her success adapting to the culture of the firm and delivering for its customers.

Having gained her Masters degree in the Netherlands, Caroline worked for a period at the European Commission in Brussels before taking some time to establish her family.

Since then she has gained a Diploma in Legal Practice and established herself in Family Law, working for Rollos Law, Garden Stirling Burnet and Stevenson Marshall.

Caroline said: “I knew early on that the environment was right for me to succeed here and I’m thrilled with this promotion. That we offer really good value guidance while developing meaningful long-term relationships with our clients chimed with me from day one.

“Personally speaking, having such a close-knit team with a support system throughout has allowed me to take on quite a lot of autonomy – and pursue new avenues of business, which is really exciting.

“For instance, I believe we are now perfectly placed to increase our court reporting in a big way – that’s a personal goal of mine.”

The merger with Marwicks centred the main location for Gibson Kerr’s property team at Dundas Street while India Street is home for the Personal and Family Law teams.