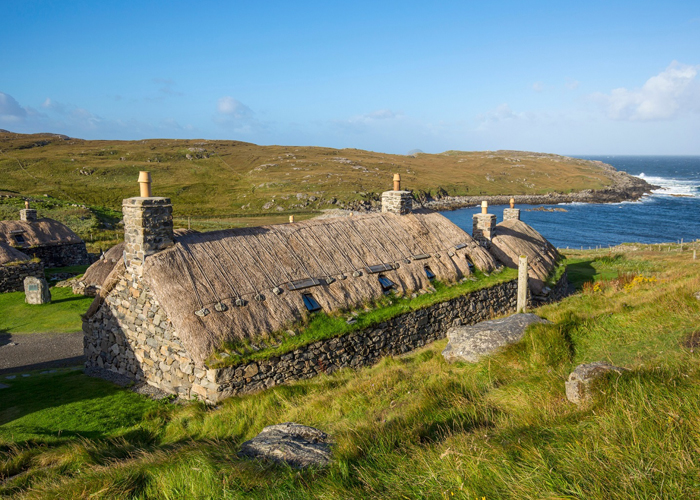 IT IS HOPED that the big screen release of period drama, The Road Dance, today (Friday, 20 May) will inspire more film lovers to experience the beauty of the Outer Hebrides.

VisitScotland is highlighting how the new movie – which was filmed entirely on the Isle of Lewis – could contribute to screen tourism – whereby visitors want to visit a location after seeing it on-screen.

The film, based on the book of the same name by STV News presenter and author John MacKay, was shot in October and November of 2020 – the first production to be shot on the archipelago during the pandemic.

Filming predominantly took place at the restored Gearrannan Blackhouse Village near Carloway on the west coast and joins the over 100 productions which have used the stunning landscape of the Outer Hebrides as their backdrops over the last decade.

Earlier this month, a special preview screening was organised on the island by national tourism body, VisitScotland, destination management organisation, Outer Hebrides Tourism, and film distributors, Parkland Entertainment, to acknowledge the support of local businesses and crew in its production, and the links to the real-life story behind the book.

Film and television productions are estimated to be worth over £4 million to the islands – though it’s believed the figure could be a lot higher – and provide a lasting legacy through screen tourism.

The Outer Hebrides on-screen appearances stretch as far back as the 1949 Ealing comedy version of Whisky Galore!. Based on the true story of a ship called the SS Politician, carrying a cargo of whisky, which ran aground on the small Island of Eriskay in the Outer Hebrides, producers opted to set the film on the Isle of Barra, using the whole island as a giant set.

Around 20 years later, critically acclaimed filmmaker, Stanley Kubrick filmed footage of Loch Airigh, Isle of Harris as the surface of Jupiter in 2001: A Space Odyssey (1968).

In 2012, Disney-Pixar animators used the Calanais Standing Stones as inspiration for the standing stones in its animated film, Brave, starring the voices of Scottish actors Kelly Macdonald and Billy Connolly.

In the ten years since, there have been over 100 productions on the islands including children’s BBC series, Katie Morag, based on the much-loved children’s books by Mairi Hedderwick; wildlife documentary series, Hebrides – Islands on the Edge; the 2019 Christmas special of BBC drama series, Call the Midwife; Amazon’s motoring entertainment series, The Grand Tour; Starz documentary series, Men in Kilts, with Outlander’s Sam Heughan and Graham McTavish; and BAFTA-nominated film, Limbo (2020).

In addition, the islands are home to BBC Alba and Gaelic productions.

Jenni Steele, VisitScotland Film and Creative Industries Manager, said: “It’s an exciting time for screen tourism in the Outer Hebrides and Scotland as a whole with a real boom in major film and television productions. Not only do these productions boost the local economy in the short-term but give viewers a taste of the country’s amazing landscapes, heritage and culture which hopefully inspire them to visit in the future.”

“Visitors continuing to cite films such as Braveheart, Highlander and Skyfall long after their initial release, as inspiration for their trips. This long-term impact allows for investment and the creation of new experiences to take place, enabling sustainable growth in tourism. This can be seen with the Rural Tourism Infrastructure Fund (RTIF) which has contributed to infrastructure developments in areas which have seen the benefits of screen tourism.”

Sarah Maclean, Chief Executive Outer Hebrides Tourism, said: “The Outer Hebrides have an established foundation of media infrastructure and skilled crew which, when coupled with our stunning scenery and rich cultural heritage makes for an extremely attractive filming location. This has been evidenced in recent years by the number of productions keen to come here to create and produce, bringing with them business and economic stimulus for the islands which cumulatively runs to millions of pounds of investment.”

“Accommodation businesses, transport firms, local shops and hospitality businesses all benefit as do supporting actors and freelance crew based here.  It has been a vibrant few years for the sector and all the more welcome when economic circumstances have been very challenged by the pandemic.”

“But perhaps most importantly the productions that are made here showcase the island’s beauty and often our culture to a global audience which helps to drive tourism and visitor engagement.”

Ricky Hannaway, The Road Dance locations manager, said: “As with many films, the landscapes and surroundings shown are the poster child for the islands. Being a native of Lewis, I want to showcase them as much as possible though it can be difficult to have the balance between facilitating the productions and our surroundings.”

“We were fortunate however to be based out of Gearrannan Blackhouse Village – a place that needs little to attract the masses. There are many on the island who remember the bustling communities of the blackhouses so bringing that back to life was good to be a part of.”

The Road Dance follows Hermione Corfield as Kirsty MacLeod, who dreams of a better life away from her small village in the Outer Hebrides. However, the outbreak of the First World War and a fateful road dance take her life on a dramatic and tragic turn. Corfield stars alongside Mark Gatiss and Morven Christie.