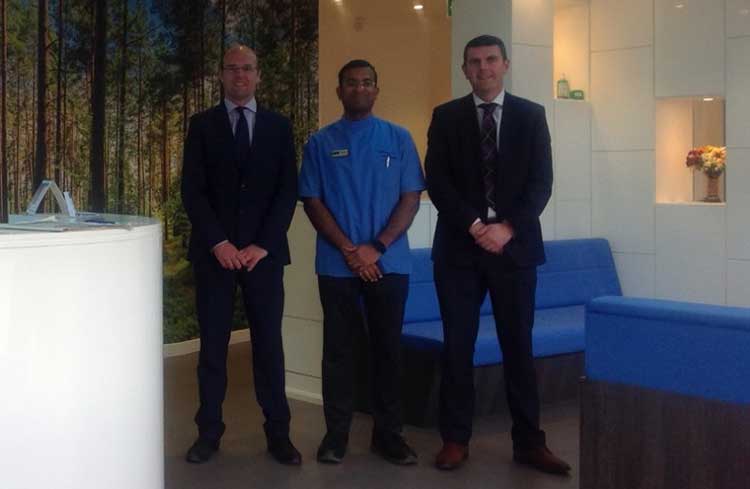 M-Brace Orthodontics has opened a new practice in Airdrie as it expands its business and creates new jobs with support from Royal Bank of Scotland.

Launched in Glenrothes in 2009, the dental business has since opened a further two practices, with the latest Airdrie high-street branch bringing five jobs to the local area.

Specialising in orthodontic treatment, the business works on a referral basis – and has built a strong reputation among the dental community in Scotland over the past ten years by providing a top-class service for patients. With premises in Glenrothes, Bathgate and Airdrie, M-Brace now employs more than 20 staff; providing patients with a full range of orthodontic treatment in areas where they would otherwise have to travel a distance to be seen by a specialist.

Founder, Mahesh Raja, believes the key to the growth of the business is his customer service first approach to patients, which has allowed him to build up a strong network in the areas he works. In his Airdrie practice, for example, ceiling mounted televisions have been installed to allow patients to watch their favourite television shows and films as they are seen by specialist staff.

Royal Bank of Scotland, which has expertise in healthcare funding, provided advice and funding for all three of Mahesh’s practices – most recently to support the purchase of the Airdrie premises alongside support from Lombard which assisted with the purchase of equipment.

Mahesh, who has been practicing for more than 26 years, said: “We’re extremely proud of the work we do at M-Brace, and the quality of service we’re able to provide to patients. Royal Bank of Scotland has played a key role in providing access to finance to allow us to expand the business and bring the service to communities across Scotland. We look forward to establishing ourselves in Airdrie and providing the local area with an important amenity.”

Andrew Scott, Senior Relationship Manager at Royal Bank of Scotland, said: “Mahesh has shown real business acumen since he opened his first practice. The locations, services and manner in which he has built his practice has allowed him to grow his customer base and provided the opportunity for further growth. We look forward to seeing M-Brace Orthodontics continue to grow in the coming months and years.”