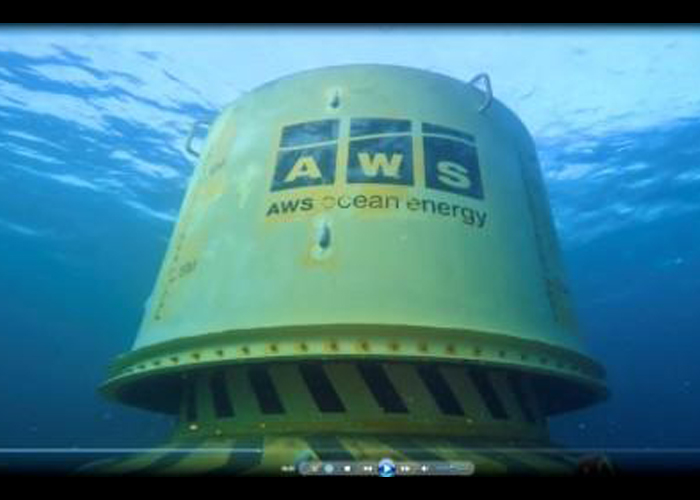 The Waveswing wave energy prototype device at EMEC in Orkney

INVERNESS-based AWS Ocean Energy has announced highly encouraging results from the current phase of sea trials of its wave energy device at the European Marine Energy Centre (EMEC) in Orkney.

In a key highlight of the scientific testing programme to date at EMEC’s Scapa Flow test site, the Waveswing wave energy converter captured average power over 10kW and peaks of 80kW, during a period of moderate wave conditions. These figures exceeded the developer’s own predictions by 20%.

Other key findings underline the survivability potential of the subsea Waveswing which continued to deliver power in poor weather conditions. AWS demonstrates this in a simple but highly effective video clip, shot during Force 10 gales, showing a steel nut suspended on a string inside the device.  https://youtu.be/uRu7-EFQv0c

The testing programme also demonstrated that deployment of the Waveswing from sitting on the quayside to being installed and fully operational is possible in under 12 hours. The current phase of sea trials is scheduled to complete by the year end and AWS is looking to re-deploy for further testing early in 2023.

Simon Grey, CEO of AWS Ocean Energy, said: “These figures underline our strong belief that Waveswing is the real deal. While we have always been confident about the performance potential of the Waveswing, it is wonderful to see that confidence endorsed by real data. We believe this performance compares very favourably with equivalent figures for any previous wave device tested on the same site. We are now actively seeking discussions with commercialisation partners, other end users and anyone who is genuinely interested in developing commercial wave power. This includes for example sponsored testing programmes, so that partners can get to know the Waveswing and its potential up close.”

Looking to the future, Mr. Grey added: “The Waveswing features a single absorber design,  with unique features which make it ideal for remote power applications such as powering subsea oilfield assets and oceanographic monitoring. However, for utility scale power, we are convinced the future lies in multi-absorber platforms which can achieve the scale necessary for wave power to make a significant contribution to renewable energy supplies. We expect to develop platforms hosting up to twenty 500 kW units with a potential capacity of 10 MW per platform”.

When installed, the 50 tons, seven-metre high, four-metre diameter device is moored to a gravity-base anchor on the seabed using a single tension tether and sits around three metres below the surface. The Waveswing generates energy by reacting to changes in pressure caused by passing waves. The subsea location and ability to winch low in the water column allows extreme storm loadings to be avoided so that the device can continue to operate in rough sea conditions. The Waveswing is also designed to react to long ocean swell waves as well as short, wind-driven seas, for high energy capture.

The £3.4 million prototype development project has been funded by Wave Energy Scotland (WES), as part of the Novel Wave Energy Converter development programme. The demonstration at EMEC is also supported by the Interreg North-West Europe’s Ocean DEMO project.

Tim Hurst, Managing Director, WES, said: “WES is excited to see real data coming from the sea trials for the Waveswing device, and the evidence coming forward that its design features are working successfully to deliver energy generation performance above and beyond expectations”.

Neil Kermode, Managing Director, EMEC said: “It has been great to see the Waveswing deploy, survive and operate at our test site this year. We are looking forward to analysing the data from these trials in the coming weeks as we complete a performance assessment and help the AWS team show exactly what they have achieved with this imaginative project. “We know there are epic amounts of energy in the seas around the UK and indeed the world. It is really rewarding to see a Scottish company make such progress in harvesting this truly sustainable energy.”

The Waveswing development programme has been supported by a strong, predominantly Scottish team of subcontractors including 4c Engineering and Quoceant on design, Sequentec on supply of the control system, Malin Marine for the main build and assembly work, and JGC Engineering for fabrication of the anchor frame. International subcontractors include Trelleborg for supply of the rolling seal and SRP Subsea for supply of the Rocksteady mooring connector. Quayside and marine operations were carried out by Orkney-based companies Green Marine, Leask Marine, and Heddle Construction, with demonstration activities supported by EMEC’s operational team.