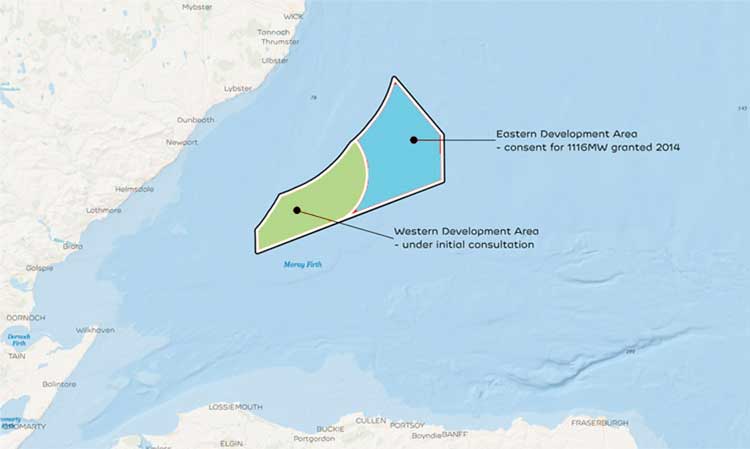 Highland firms are being invited to bid for work worth tens of millions of pounds from one of the world’s largest offshore wind projects.

The chance of new contracts for onshore infrastructure and installation work relating to the Moray West Wind Farm are being offered via the Open4Business Highlands and Islands (O4B H&I) online portal.

It is the biggest opportunity highlighted on O4B H&I since the site was re-launched in April and provides a major shot in the arm to the local workforce as it gears up to serve the multi-billion-pound offshore wind industry.

O4B H&I is operated by Inverness Chamber of Commerce on behalf of Highlands and Islands Enterprise, which recently took over ownership of the portal from SSE.

It provides small and medium sized companies in the region with greater opportunities to secure work. The free platform also helps suppliers and service providers advertise to a wide audience.

Moray Offshore Windfarm (West) Limited has consent to develop a wind farm in the Outer Moray Firth consisting of an array of up to 85 turbines. The project is currently bidding in to the ‘Contract for Difference’ (CfD) auction, the results of which should be known next month.

The wind farm will be connected to an onshore substation in Moray with the first power expected to be generated in 2024.

It will be constructed next to the £2.8 billion Moray East Wind Farm, work on which started in 2018.

Both projects, along with SSE’s Beatrice Offshore Wind Farm, featured in this month’s DeepWind offshore wind cluster day organised by HIE to provide updates from developers and presentations on the emerging market in floating wind technology.

Using O4B H&I at this stage of the procurement process, the project is looking to gain an understanding of the interest and availability for the works. Firms successful in the pre-qualifying phase will be invited to tender in October.

Moray West lead partners EDPR and Engie say they recognise the need to support the local supply chain and also the potential value from using local suppliers to the site.

Peter Haughie, procurement manager for Moray West Wind Farm, said: “As ‘cluster champion’ for DeepWind, covering the north and north east of Scotland, we see O4B H&I as an integral tool in making a success of the cluster.

“Local suppliers should be cost competitive and so provide value to the project. Local contracts will support local jobs on the road towards the DeepWind aspiration of creating at least 3,000 new jobs across the area by 2030.”

He said the opportunities include a wide range of services supporting onshore construction-related work and the onshore cable corridor, as well as catering contracts to larger consultancy opportunities worth several millions.

“It is an endorsement of the local workforce and demonstrates a willingness by the developers to use local services which could have an enormous impact on the Highland economy.”

The portal was originally established by SSE in 2012 and its worth was demonstrated by the fact that in just over five years it awarded more than £174 million in contracts to local businesses.