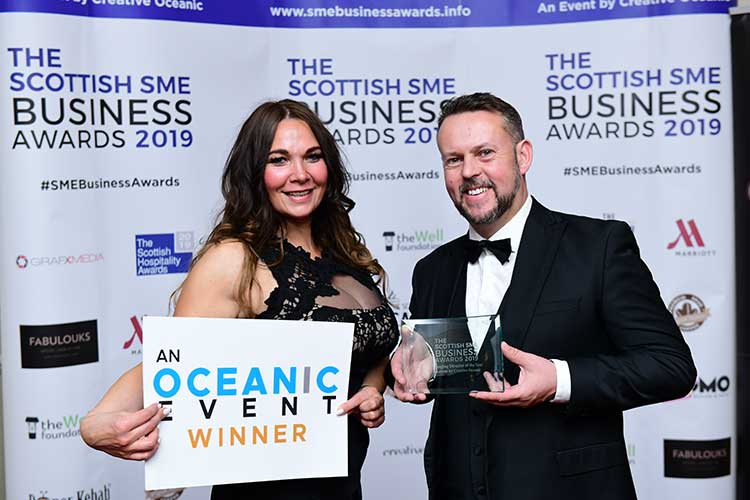 The founder of Scotland’s largest organic waste management firm, which is headquartered in Aberdeen, has secured a top Scottish business award.

Grant Keenan, who runs Keenan Recycling, was named as Managing Director of the Year at the Scottish SME Business Awards in Glasgow.

The awards, which are in their third year, recognise successful SME’s from across Scotland that have pushed the boundaries of innovation and imagination in enterprise.

With its roots originally in the garden composting business since 2001, Keenan Recycling launched its own commercial food waste collection service in Scotland in 2010. The company now processes more than 150,000 tonnes of organic waste a year, turning it into compost and electricity.

Headquartered in Aberdeen, Keenan Recycling currently employs more than 90 people across its bases in Edinburgh and Fife and has a 14-acre recycling site at New Deer in Aberdeenshire with a second base being developed at Linwood, near Glasgow. The business also recently expanded its collection service into the north of England and is set to launch in Leeds in the coming months with overall UK coverage planned within 18 months.

There were 31 awards announced and the event and ten finalists competing for the Managing Director of the Year Award.

Managing director of Keenan Recycling, Grant Keenan, said: “There were some very worthy contenders in for the award from all across Scotland, as far north as Caithness, so I was surprised to be named as the winner.  The awards are a real celebration of the vast range of small to medium businesses making a difference in their market in Scotland and the fact that the awards are voted for by the public make it an extra special win.

‘We have seen our business grow from a small business in 2001 to a large-scale operation, which has expanded across Scotland and now into England with additional investment support from Business Growth Fund.  Although I have been personally recognised with this award, I have a strong support team in the business, including my brother, Gregor, my dad, Mel, and my wife, Claire, so the award is great recognition for everyone’s support in growing the business over the years.”

Mr Keenan is also a previous Scottish winner of the highly prestigious EY Entrepreneur of the Year. The firm is on target for a £10 million turnover this year, which it aims to grow up to £40 million in the next five years.