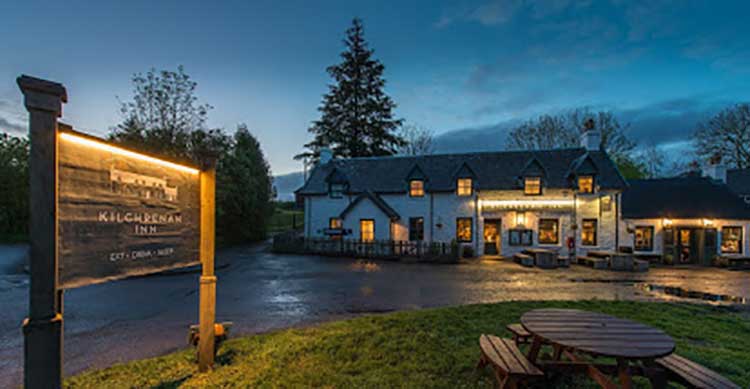 The Kilchrenan Inn in Argyll & Bute

The Kilchrenan Inn in Argyll & Bute is the site of a new hotel run by MTM Hospitality, thanks to a five-figure finance package from Royal Bank of Scotland.

The rural inn, which is situated close to the shores of Loch Awe, will be run by Philip Carr and Philippa Pedley who together have significant experience in the hospitality sector.

Once an 18th century trading post, the Inn – which is a short drive to the resort town of Oban – was recently extensively refurbished by the landlord to offer guests modern amenities while remaining true to its traditional features.

Under Philip and Pip’s new leadership, the Inn will create five new jobs for the surrounding community, with the aim of significantly growing the business and its turnover, and offering high-quality food, drinks and accommodation to the local area and visiting tourists.

The funding package, which was secured by Alan McNair, relationship manager at Royal Bank of Scotland, assisted with financing the start-up.

Philip Carr, director and owner-operator at the Kilchrenan Inn, said: “We were looking to move to the area of Argyll & Bute and found the Kilchrenan Inn to be an ideal business venture for us. Not only is it located within a picturesque rural location, offering stunning views of the countryside, but it had huge potential to be a go-to destination for tourists and locals to enjoy, with quality food, drinks and a relaxing place to stay. We have exciting growth plans for the business, including the creation of new jobs for the Argyll & Bute area, and look forward to the future of the Kilchrenan Inn, all of which has been made possible via the fantastic support we’ve received from Royal Bank of Scotland.”

Alan McNair, relationship manager at Royal Bank of Scotland, said: “Royal Bank of Scotland is delighted to have supported MTM Hospitality. Philip and Pip have a real drive to succeed, and their track record in the hospitality industry will have an incredibly positive impact not only on running and operating the Inn itself, but on the surrounding community, via job creation and offering a high-quality service to residents and visitors. We wish Philip and Pip every success and are pleased to have supported them with their business aspirations, as they aim to drive growth and tourism to the Kilchrenan Inn.”