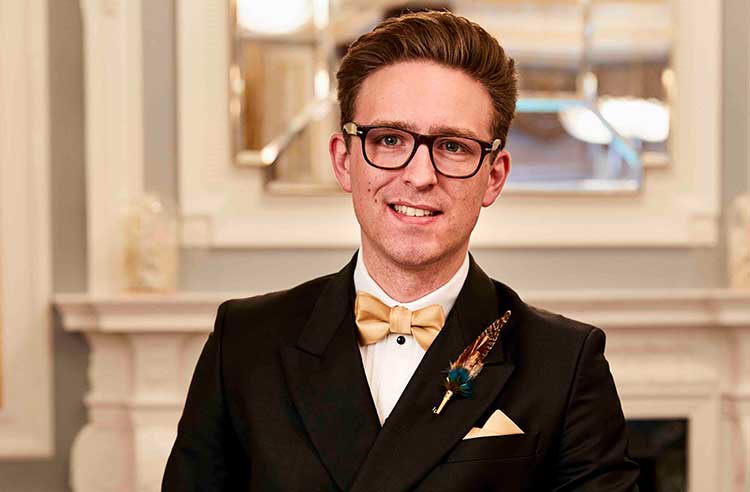 The pure theatre of golden era dining is being brought back to Gleneagles’ famous restaurant, The Strathearn, following a new management appointment.

Daniel Greenock, 31, from Killearn, near loch Lomond, has been appointed as Restaurant Manager of The Strathearn, which re-opened on 1st May.

The unique venue has undergone a full interior design transformation and renovation by the in-house creative team at London’s Ennismore Design Studio over the past year.

Having honed his craft at Marcus Wareing’s Michelin-starred restaurant at the Berkeley Hotel and the world-renowned three Michelin-starred Eleven Madison Park in New York, Daniel has moved home to Scotland to take on his leading role at The Strathearn.

Commenting on his appointment as Restaurant Manager at The Strathearn, Daniel said: “I’m extremely proud to be taking on this new role at a time of significant transformation for Gleneagles.

“Dinner at The Strathearn will be a decadent affair, with traditional gueridon service from bespoke dining trollies bringing excitement and energy to the room as a selection of classic dishes are finished at the table. Personally attending each table, the team will add theatrical flair to the evening, as they effortlessly carve Gleneagles & Co Marrbury whisky barrel smoked salmon from Dumfries, prepare and dress a seasonal salad, or flambé a ‘Steak Strathearn’, Gleneagles’ take on Steak Diane on request.”

The kitchen brigade – led by Head Chef, Jason Hardcastle, Executive Sous Chef, Richard Dalgleish, and Executive Pastry Chef, Phil Skinazi, and overseen by Executive Chef, Simon Attridge – will be creating the restaurant’s menus. Using the finest locally-sourced and Scottish ingredients, the menus will celebrate classic French cuisine and the best of the season.

Heading up the wine programme, Advanced Court of Master Sommelier, Jean-Marie Contestin – who formerly managed the wine programmes at the two Michelin-starred Gidleigh Park and Le Pont de la Tour in London – will oversee a wine list that has doubled in size to 700 wine labels.  There will also be a choice of over 100 single malt whiskies on the menu.

Daniel continued: “Originally known simply as ‘the Dining Room’, the restaurant has been a destination for decadent dining and lively celebrations since Gleneagles first opened nearly 100 years ago and has hosted a range famous faces over the decades, from Vivien Leigh, Sir Laurence Olivier and Sir Sean Connery, to John Travolta, Bob Hope and Her Majesty The Queen.

“The show-stopping new look is very much inspired by the venue’s colourful history, including the golden age of railway travel, when glamorous socialites would travel in style from London to Gleneagles to enjoy summer seasons of country sports and decadent dining.

“Our team has cleverly brought back the vibrancy, energy, playfulness and glamour of fine dining experiences from a century ago, including the elegant décor, history, lively atmosphere, culinary theatre and exceptional food.”