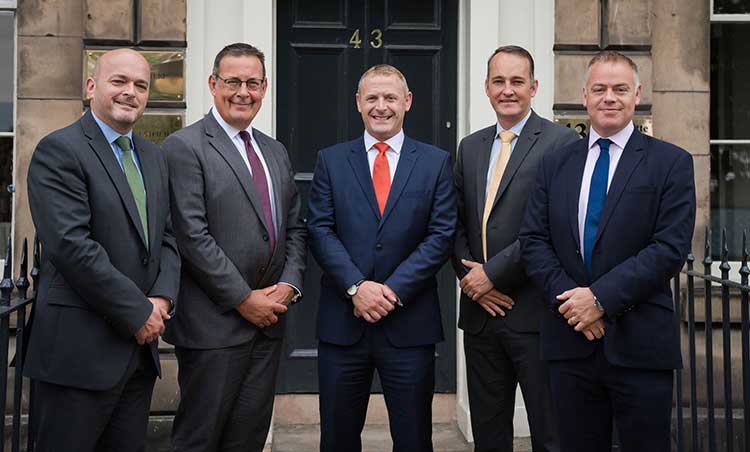 The new venture is part of HNH, a Belfast-based multi-disciplinary advisory firm which typically advises on deals in the £1m to £50m range.

Prior to joining HNH, Neal was head of M&A for KPMG Scotland, Harry was a partner in French Duncan LLP, Bruce led KPMG Scotland’s debt advisory team and Chris was an Assistant Director in EY’s corporate finance team.

The new team, which will initially focus on providing M&A, debt and transaction services, has already completed an advisory role for foodservice firm R&W Scott as well as a significant funding role in the distilling sector. Other clients have been drawn from financial services, manufacturing, building products and transport sectors.

Director Neal Allen said: “We’re all excited to join HNH and build the business in Scotland by offering SMEs a new approach to corporate advice. While some business owners are rightly cautious because of Brexit and global economic concerns, many of our contacts, particularly in food services, are telling us they want to execute growth plans. By providing senior-level advice, which was previously viewed as the preserve of larger firms, we can help SMEs grow through potential headwinds by securing the right funding options, partners and acquisition targets.”

Harry Linklater, Director. added: “Having developed client relationships over time with a focus on the Scottish SME sector, I’m keen to continue working with long-established contacts within a progressive advisory focused firm. As we build our presence in Scotland as HNH, we will leverage the firm’s relationships with equity and debt funders across various locations, to offer the Scottish market something new and different.”

Bruce Walker, who joins as a director at HNH after 25 years with KPMG, said: “The boutique business model at HNH allows us to react to clients’ requirements quickly and to adapt accordingly. The entrepreneurial nature of the firm, investing in growth and expanding into new markets will, we believe, give us a natural affinity with the SMEs which make up a major part of the Scottish economy.”

Director Chris Fawbert commented: “Over the past eight years, HNH has built a strong reputation as a leading corporate finance practice in Northern Ireland. We are excited about building upon that in Scotland, where the mix of SME advisory opportunities and public sector related work which the market produces fits well with the team’s past experience and outlook.”

HNH is a well-established, independent Northern Ireland-based company which works extensively with the directors and shareholders of entrepreneurial companies throughout the UK and Ireland. The company was ranked at the top of Experian’s H1 Deal Activity Report, both in terms of deals completed and deal value in Northern Ireland.

Scottish clients will have access to its expertise in corporate finance, transaction services, business restructuring, taxation, forensic accounting and human capital. The new office represents a significant investment by the firm in establishing its first office outside Northern Ireland.

Craig Holmes, Managing Director of HNH, said: “This is an exciting move for HNH as we build on great foundations in Northern Ireland to extend our offering to Scotland. Assembling a team as strong as this demonstrates how confident we are in the Scottish economy. While initially focusing on M&A, HNH in Scotland will also have access to our business restructuring, tax advisory, forensic and human capital teams.

“The opportunity to hire four of the best networked corporate advisors in Scotland, with unsurpassed market knowledge and deal experience, and be the first to offer such senior expertise to the country’s ambitious SMEs, is an innovative approach. By providing SMEs with access to a team of director-level experts with a hands-on ethos, we believe we can help our clients achieve and expand their goals.”