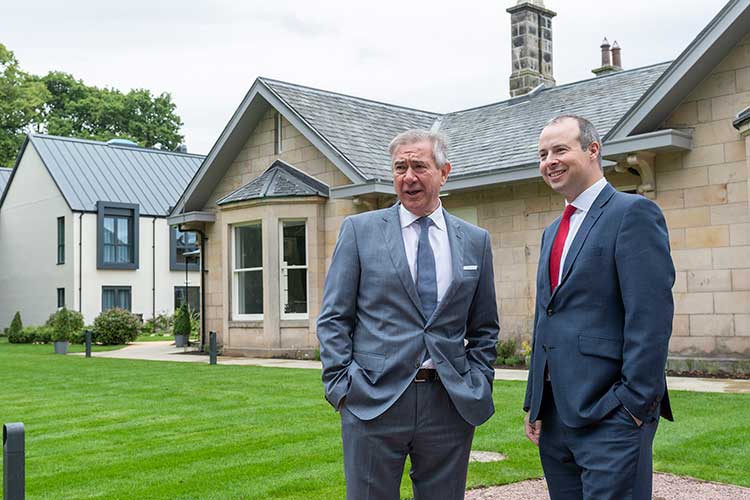 A new 5-star hotel, bringing 65 new jobs to the city, has opened in Inverness in a development supported by £4.5 million of funding from Barclays.

The 47-bedroom Ness Walk is the latest addition to Kingsmills Hotel Group’s portfolio. Design and construction of the bespoke venue on the banks of the River Ness began in 2018, with long-term banking partner Barclays providing two-thirds of the total project cost of £7 million.

Ness Walk will offer two luxury 90m2 suites which the owners claim will be the best rooms available in the Highlands. In addition, the other 45 rooms have been inspired by the hotel’s forested surroundings and will either have a private terrace or direct access to an exclusive courtyard.

The hotel will also be home to the 80-seater Torrish restaurant where exciting lunch and dinner menus created by head chef Craig Douglas will be served seven days a week. In addition, Ness Walk will have a glass walled private event space available to hire for groups of up to 200.

This is not the first time Barclays has supported Kingsmills Hotel Group to grow. The bank has provided financing for a number of projects in recent years at the nearby 4-star Kingsmills Hotel, taking it to 147 rooms and increasing that venue’s conference facilities.

Since 2012, Barclays has provided the business with £20m of funding and during that time employee numbers at the group have grown from 75 to 185.

Tony Story, Chief Executive of Kingsmills Hotel Group, said: “It is with great pride and excitement that we have opened the doors of Ness Walk and we look forward to welcoming guests who value great service and luxury.

“This venue will continue our commitment to delivering the highest levels of service in the best of surroundings and locations. Our adherence to those values has been instrumental in the success and growth of our business.

“We have worked with Barclays for a number of years now and during that time we have established a strong relationship, which is in large part due to the open-minded approach Barclays has always adopted to supporting our goals.”

Gordon McKean, Relationship Director, Barclays Corporate Banking, led the deal, and said: “We are pleased to again be playing our part in supporting Kingsmills Hotel Group to further expansion. This is a thriving business which has established a good reputation in the region and is boosting that local community through the creation of further jobs.

“Tourism continues to be very strong in Scotland and we are pleased to be supporting hospitality and leisure businesses to capitalise on that and realise their growth ambitions.”