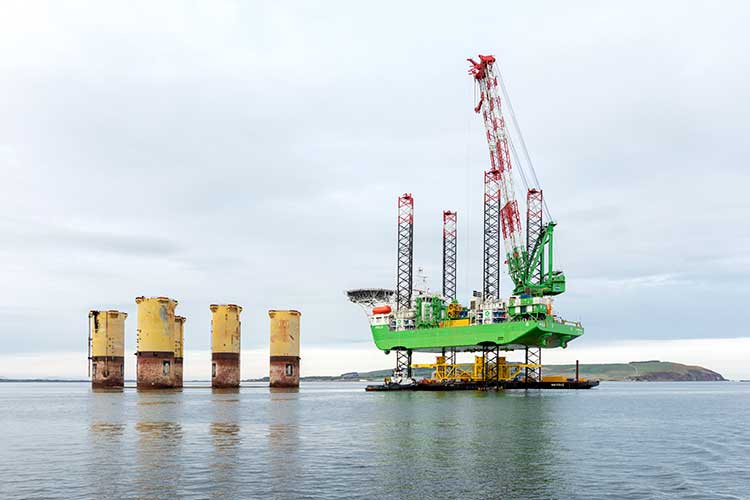 The first part of the offshore works consists of the installation of sub-sea piles – an integral part of the jacket-based foundations on which the turbines will later be installed.

DEME Offshore, part of DEME Group, said its installation ‘jack-up’ vessel ‘Apollo’ together with the first batch of piles have arrived in the Outer Moray Firth and begun the first part of a two year campaign to construct the total foundation systems for 100 MHI Vestas V164-9.5MW turbines and the three offshore substations that will make up the windfarm.

Marcel Sunier, Project Director for Moray East said: “After nine years of planning and development, this major milestone moves the project from concepts and plans on paper to the reality of steel in the ground offshore.

“I look forward to working with our partners to deliver safely and efficiently, a major generating asset capable of supplying the equivalent of more than 950,000 households with low-cost, low-carbon electricity.”

The storage of the piles and the piling template are part of a deal worth over £1m to the Port of Cromarty Firth, including shipping revenues.

It will be followed next year by an 18-month contract directly with Moray Offshore Windfarm (East) Ltd, worth £10m announced last November, to provide storage of wind turbine components including towers, blades and nacelles for pre-assembly and shipping to site.

Bob Buskie, Chief Executive of the Port of Cromarty Firth, said: “This is a major project and a significant contract for the Port and the Highland region.  It shows the faith a business the size of DEME Group has in our storage and delivery capabilities.

“The Moray East Offshore Windfarm development is of huge importance to both Scotland and the renewable energy sector. We are proud to be a part of that, helping to deliver clean energy to this wonderful part of the country.

“It shows the success of the Port’s diversification strategy, and the Firth’s proven track record of delivery in the offshore wind sector is now leading to further discussions at Government level which could attract additional investment to the region.

“In the future we hope our own development plans – especially for our new £31m Energy and Cruise Hub – will help open up the Port and allow it to accommodate even more large-scale projects from across all sectors.”

Once the piles installation programme is completed, the specialist DP3 offshore installation vessel Orion will continue the work next year by installing the 103 ‘jackets’ that form the other foundation components.