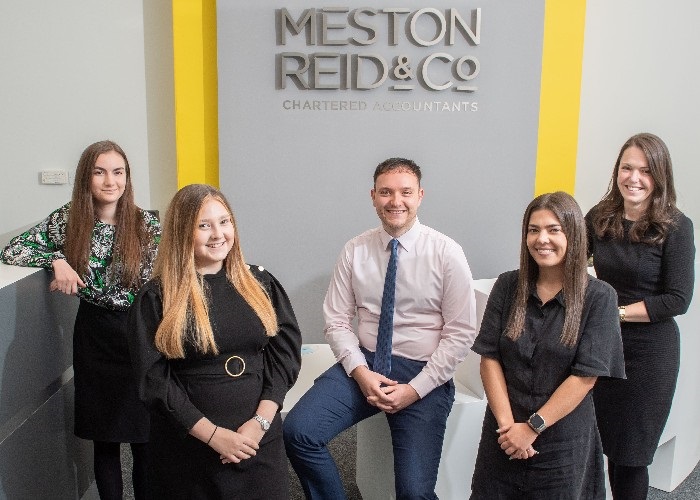 Its trio of trainees – Jonathan Bain, Cara Wilson and Kendall Gibson – have recently graduated from Robert Gordon University (RGU) with First Class Honours degrees in Accounting and Finance and are now ICAS trainee accountants. Natalia Cram is now on a placement with the firm in the third year of her RGU studies.

Aberdeen-based Meston Reid & Co has a long track record of supporting the next generation of accountants – it has accepted placement students from RGU’s Accountancy and Finance degree in all but two of the past 24 years.

Jonathan, Cara and Kendall will be undertaking their ICAS (Institute of Chartered Accountants of Scotland) training and exams. Jonathan attended Robert Gordon’s College in Aberdeen before his RGU degree while Kendall was a pupil at Banchory Academy. Cara, who attended Oldmachar Academy, obtained an HND at North East Scotland College while working as a tax administrator prior to her university studies. Placement student Natalia is originally from Middlesbrough and a former pupil of Bridge of Don Academy.

Louise Smith, business services manager in the audit and accounts department, was Meston Reid’s first student placement before going on to gain her Accountancy and Finance degree from Robert Gordon University. After University, she became a qualified chartered accountant with ICAS – the same route that the new trainees will follow.

Louise said: “We recognise the importance of investing in the future of our profession and have an excellent record of developing and training young accountants. We are pleased to welcome all four of our newest additions to the team.”

Meston Reid & Co also offers a Graduate Apprenticeship Scheme in which students work for the practice while studying for a degree in Accountancy and Finance. The apprenticeship is a collaboration between RGU, ACCA (the Association of Chartered Certified Accountants) and ICAS.

Established in 1990, Meston Reid & Co is an accountancy practice with strong expertise in tax, audit, insolvency, corporate finance, business advice, payroll and landed estates. The firm, based at Carden Place, has a broad range of clients, from sole traders to large businesses with international operations.

Two-thirds of adults surveyed in Scotland say rising cost of living has impacted their ability to save money, Accenture research finds