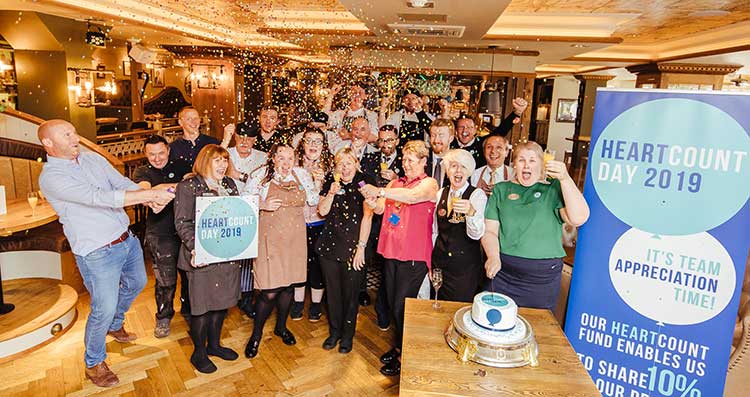 To show appreciation for all their employees The Manorview Hotels & Leisure Group’s HeartCount Fund has shared 10% of the Group’s profits with their team.

Under the Profit Share Scheme, Manorview committed to allocating 10% of its pre-tax profits to the HeartCount Fund. The Manorview Group has achieved a pre-tax profit of £554,440 for the year to 31 March 2019, which has led to a total of £55,344 to be paid out across qualifying team members.

A total of 281 Manorview team members qualified to receive a payment which equated to approximately 1.3% of their Gross earnings for the year to 31 March 2019.  The average Gross pay-out (before deduction of Employee taxes) amounted to approximately £200 per employee.

The Group has a workforce of over 500, and not all employees qualify to be part of the HeartCount Fund. To recognise the valuable contribution of all employees, the team members who didn’t qualify for a HeartCount Fund payment, received a Manorview gift voucher.

The ethos behind the fund is to encourage people retention, and it is hoped that the people who didn’t qualify this time, will be receiving payments with the next pay-out. The Group want their teams to feel appreciated, to want to stay within the Group, and to see longevity in their careers with Manorview.

As well as the HeartCount Fund, the Group also provides many other benefits which all team members enjoy. These include, a massive party for the whole Group, which was held in January, a day off for charity work, discounts throughout the venues, access to mental health and wellbeing counselling and free gym membership.

David Tracey, Managing Director, The Manorview Group said, “Our HeartCount Day was a celebration for all our teams, to show appreciation for their hard work, commitment and efforts. As a Group we are continually striving to be the best, in all areas of our business. We want to promote careers in hospitality. Within the industry and beyond, our goal is to be recognised as a great place to work, where people feel appreciated and want to stay. Initiatives such as the HeartCount Fund and our day of celebration are an integral part of our Manorview culture.”

This year the Manorview Hotels & Leisure Group was listed in the London Stock Exchange 1000 Companies to Inspire Britain Report. This is the third time the company has been listed, having made the list in 2017 and 2015.