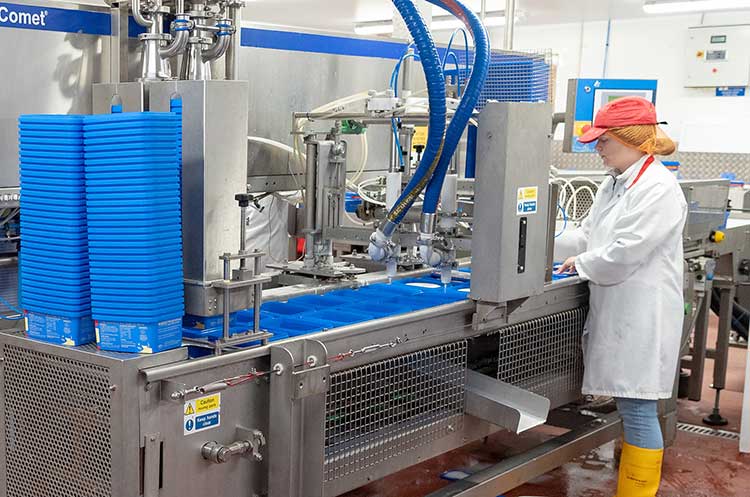 Part of the Mackie’s production line

Mackie’s of Scotland has passed the £15 million turnover mark, thanks in large part to a growth of over 100% in export sales to East Asia as its ice cream becomes a popular ingredient in Bubble Tea and other hot drinks.

The dairy ice cream is popular served in hot drinks and Bubble Tea – a fashionable sweet drink mixed with small starch or fruit balls  –  in addition to being enjoyed on it’s own for dessert.

Ivan Jefford, Head of Export Sales at Mackie’s, said: “Ice cream is being used as a substitute for the milk or cream we’d add here in the UK.

“Our Traditional ice cream, which has no vanilla, has the right fresh milky, creamy notes to suit this new market demand..and can then be mixed with various other flavours,  it’s a bit like a ice cream milkshake!”

But Mackie’s of Scotland also has a hot UK summer to thank for its climb from £12.7 million in 2017/18 to £15.4m in 2018/19, as its 1 Litre Traditional tubs have been propelled into the position of 4th bestselling premium ice cream product in the UK with volume sales up 24%.

The Aberdeenshire-based business is now focussing on putting its profits back into the growth of its business, having invested in a rotary filler that will help it keep up with demand for the range of its mini tubs, as well as the hiring of 19 new members of staff, taking its employee count to 89.

In a £4 million project, Mackie’s is also replacing all its existing freezing equipment with low carbon, power efficient units run on ammonia – a natural refrigerant gas that poses no threat to the environment – as it strives to be the greenest company in Britain.

Stuart Common, Sales Director, at Mackie’s of Scotland said: “We’re certainly not one of the giant ice cream producers, so competition can be tough.

“But thanks to continued support for our traditional recipe that we make on the family farm here in Scotland, and the relationships we’re building in East Asia as they get a taste for our product, we’ve had some great successes.

“It’s fantastic to see the team grow with the business, too, as we take on staff at every level of the business to help us meet our aims.”

Stuart added: “Last year was a big year for us and we’re chuffed to see all our hard work pay off.”

Mackie’s produces over 10 million litres of ice cream every year using more than 70% renewable energy thanks to its Aberdeenshire farm’s wind turbines and solar panels.

The fourth-generation family farm, Westertown, situated close to Inverurie, started producing ice cream in 1986 and still produce it all on the farm site, using fresh milk and cream from their own herd.