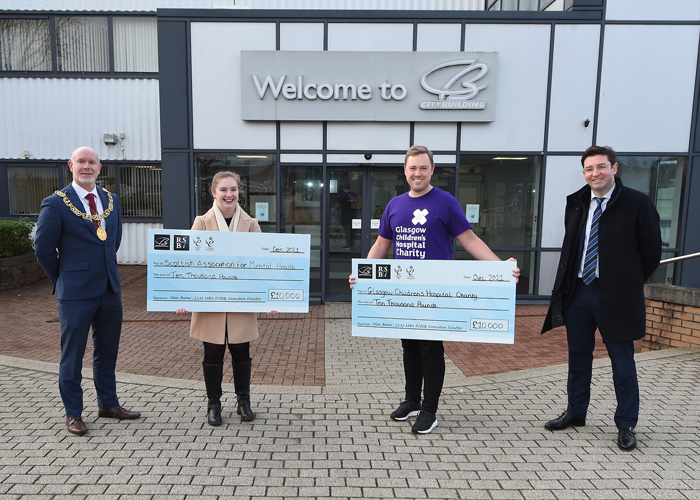 GLASGOW-based City Building was joined by Lord Provost Philip Braat to celebrate a whopping £20,000 raised by the construction firm and its supply chain in 2021. The funds were split to support two local charities – the Scottish Association for Mental Health (SAMH) and Glasgow’s Children’s Hospital Charity.

Visiting City Building’s grounds on Darnick Street in the north of the city, the Lord Provost met with representatives from each company who had donated and presented two cheques, valued at £10,000 each, to the charities; one to SAMH to recognise the current increase in mental health challenges, and the other to Glasgow Children’s Hospital Charity in order to support seriously ill children in hospital.

Alan Burns, Executive Director of City Building, said: “I am immensely proud of City Building, its employees and our generous supply chain who pulled together to make these donations possible. The Scottish Association for Mental Health and Glasgow’s Children’s Hospital Charity are two very worthwhile organisations, who we have been pleased to support previously and look forward to supporting in the future.

“It feels especially poignant to be able to support our corporate charities after another year in this pandemic, and we are privileged to do so.”

Lord Provost Philip Braat said: “I would like to thank City Building and the donors whose contributions will make a tremendous difference to the lives of so many of the most vulnerable in our society.  It was an honour to meet with representatives from the various donor organisations to congratulate their efforts – their generosity will go a long way to helping two extraordinary charities continue their mission to support our communities.”

While City Building previously held annual golf days alongside their supply chain to raise money for their corporate charities, they were unable to do so amidst the ongoing pandemic. Instead, the firm raised money through a team trip to complete the UK’s Three Peaks and called for donations from its supply chain, used to support both charities.

Fiona Lewis, Corporate Partnerships Manager at SAMH, said: “This generous donation from City Building and its partners has been accepted at a crucial point during the pandemic, in which many have had difficulties with their mental health. This funding will allow us to continue delivering our essential services to support those struggling across the country. A huge thank you from everyone at SAMH to City Building and its partners for their commitment and kind support of the mental health cause.”

William McGowan, Head of Partnerships and Events from Glasgow Children’s Hospital Charity, said: “We rely on donations to fund life-changing equipment, support services and research at Scotland’s busiest children’s hospital. We would like to thank City Building and its supply chain for its continuous help and are proud to have partnered with the firm in 2021.”

New homes must show 30 per cent cut in carbon emissions