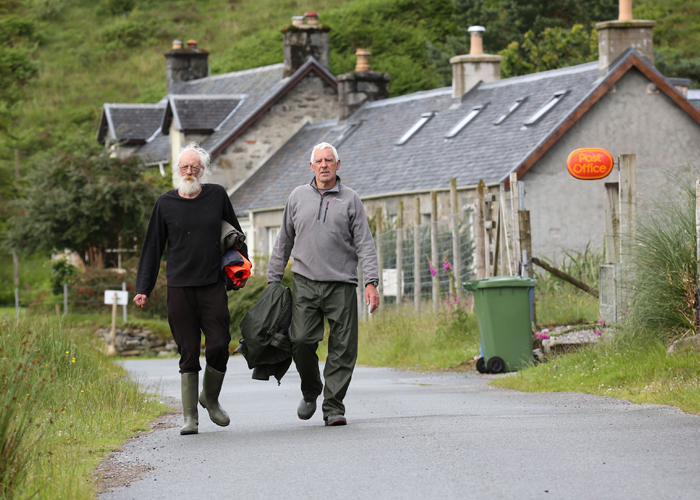 A TINY Highland community in a remote area known as Scotland’s last wilderness has won a stunning victory over a multi-billion-pound salmon farming giant.

Now the group says its campaign to block expansion of the salmon farm on Loch Hourn is a rallying call to other coastal communities, marking a crucial first in the battle to protect wild fish populations.

The Friends of Loch Hourn (FoLH) group believes its knife-edge planning committee victory represents the first time in Scotland that such a project has been quashed because of the threat to wild salmon and sea trout.

It says the David versus Goliath victory is a milestone moment in recognising the biggest threat posed by industrial scale fish farming – how parasites harm wild species.

Peter Fletcher, whose family has lived for many generations in Arnisdale, said: “At least two main rivers here are now extinct as far as salmon are concerned and a third is teetering on the edge.”

“Within living memory Loch Hourn was teeming with salmon and sea trout. Now wild populations have dwindled so far that they are under threat. It is an ecological catastrophe.”

“While this decision is just vindication of the incredible efforts of our tiny, rural community against the might of a huge corporation, the fight to restore the loch’s habitats and species is only just beginning.”

Loch Hourn, considered the most fjord-like of Scotland’s west coast sea lochs enjoys a dramatic setting, It sits between the Glenelg peninsula to the north and the inaccessible Knoydart peninsula to the south, and is often referred to as Scotland’s last wilderness.

The Creag an T’Sagairt salmon farm is owned and operated by the £2.28 billion-a-year Norwegian seafood giant, Mowi and farms 2500 tonnes of salmon in its open cages. It initially applied to Highland Council for permission to increase production by 25% to 3100 tonnes.

That spurred FoLH into action and with a combination of grant and private funding the group commissioned scientific modelling, which showed that the increased numbers of sea lice coming from the farm would not only further endanger wild salmon and trout, but also would adversely affect the vulnerable Loch Hourn population of freshwater pearl mussels.

On top of that, the slow flushing loch cannot quickly get rid of the chemicals used by the farm to kill lice, which are also toxic to other crustaceans and potentially to swimmers.

Mounting evidence from all around the world has focused on the threat from sea lice. Marine Scotland has summarised that science and clearly stated that wild fish closer to Scottish salmon farms have an increased “stress-inducing sea louse burden”.

On June 15, FoLH’s detailed evidence, supported by individual submissions by the Loch Hourn community and The Skye & Lochalsh Rivers Trust, led to a 7-6 vote by the Northern Planning committee in Dingwall to reject Mowi’s application, albeit by then reduced to 2750 tonnes.

Mick Simpson, a local fisherman in Arnisdale praised councillors who took the time to read the FoLH dossier and added: “We owe thanks to those councillors who made an effort to see what the research says. Armed with that information it was clear their consciences would not allow them to vote for this expansion to the fish farm.”

“Throughout this process we have doggedly stuck up for the truth by research and by documenting everything we could to show why this expansion would be a disaster for the area. We hope Mowi will now respect the planning decision and the feelings of the local community.”

“Our hope now is that we can inspire people that this can be done, even for super-remote communities like ours. As members of the Coastal Community Network, we know many similar groups will be looking at this decision very closely.”

Mowi Scotland has given their own response to the decision. Stephen MacIntyre, Head of Environment for Mowi Scotland, commented: “We were disappointed with the decision of the committee given the application received no objections from all statutory science bodies and that the planning officials had recommended the application for approval. We are now reviewing the process that led to this decision and considering our options.”

Despite its victory, FoLH was not set up solely to oppose the salmon farm. It will now survey the loch to assess the viability of restoring native oyster and sea grass beds, vital habitats for other marine species and important for carbon sequestration and storage and will also support ongoing research into the cause of a sharp decline of blue mussel populations.