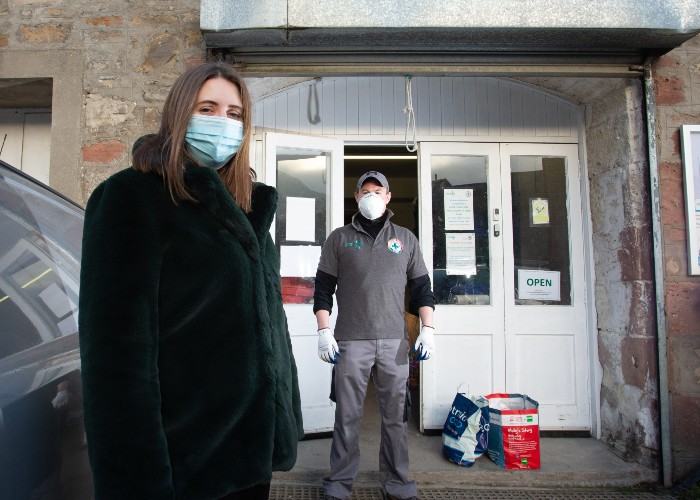 Inverness-based senior associate Sine Mackay delivering provisions to the Highland Foodbank, which the team collected as part of the 30 challenges over 30 days drive. Credit — Alison White.

A Scottish law firm is donating £7,000 to mark its 30th anniversary.

IN total, £4,000 will be split between three care homes in Aberdeen, Inverness, and Edinburgh as well as a hospice in Denny — all have links with the firm.

As part of marking those three decades, Ledingham Chalmers asked 30 colleagues across its offices in Aberdeen, Edinburgh, Inverness, and Stirling, to volunteer in November to help raise £3,000 by taking part in 30 challenges over 30 days.

For each sign-up, the Ledingham Chalmers Charitable Trust pledged to donate £30, with a further £30 for successful completion. The trust also said it would top up the donation for exceptional effort.

·      The firm’s craft club made and sold festive wreaths, raising £500. Wreaths left over were donated to Charlie House, which supports babies, children, and young people with life-limiting and life-threatening conditions, to sell in Curated Aberdeen in the city’s Bon Accord Centre

The firm asked 30 colleagues to climb 30 peaks (large or small) on or around 31 July. Thirty-one took part, reaching 37 summits of 25 different hills and mountains.

The most northerly peak was the highest point on Mousa, Shetland, while others tackled the likes of Mount Keen, Clachnaben, Beinn Bhuidhe, the Chalamain Gap and Ben More.

Private client associate Dara Kinloch reached the top of the highest peak, Ben Nevis, with her brother after four-and-a-half hours.

Managing partner, Jennifer Young, said: “In what was, again, such a difficult year for so many, it’s hard to express just how grateful we are to everyone who took on a challenge — some more than one — to help these organisations that do so much for our local communities.

“Meanwhile there’s more to do. Between March 2020 and April 2021 our charitable trust donated a total of £6,000 to good causes in the communities where we operate.

“And watch this space for an update on our Christmas card donations. For every card we send we’ll donate to Social Bite, a major employer of people experiencing homelessness and extreme employment barriers, as well as Highland Foodbank, which provides emergency support to local people in crisis.”