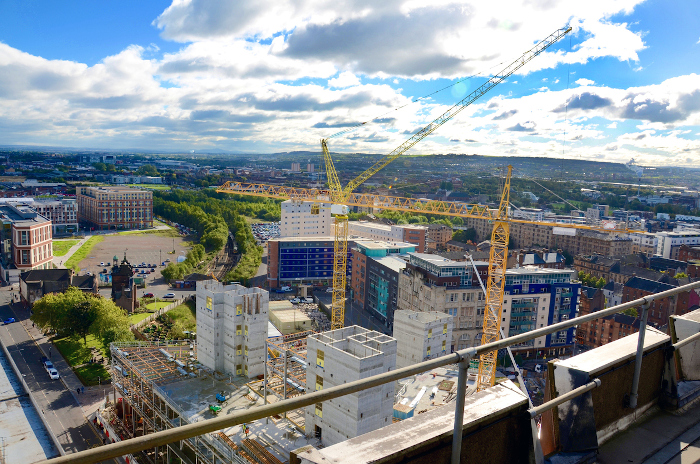 The construction of Glasgow`s International Technology and Renewable Energy Zone which includes the Inovo building and the Technology and Innovation Centre.

SCOTTISH local builders experienced a decline in their fortunes in the fourth quarter of 2019 with the political uncertainty in the period up to the General Election having a marked effect, according to the Federation of Master Builders (FMB) Scotland.

The key results of the FMB’s State of Trade Survey for Q4 are:

Gordon Nelson, FMB Scotland Director, said: “2019 was dominated by political uncertainty concerning Brexit and the General Election. The workloads and future prospects of many construction SMEs are determined by consumer confidence and spending power and so it’s not surprising therefore that the results in Q4 dipped. That the results remained in positive territory is testimony to the resilience and reputation of professional SME construction firms”

Nelson added: “While one of the Brexit conundrums has been resolved with confirmation that the UK will leave the European Union this week, there are other conundrums for consumer and business confidence in 2020. The SNP continues to press for a second independence referendum. Whilst this has been rejected by the UK Government, the ‘indyref 2’ question will persist. Quite what effect this will have on the performance of Scotland’s construction sector remains to be seen.”

Nelson concluded: “That said, with the Scottish National Investment Bank being recently passed by the Scottish Parliament it is hoped that this will provide a much-needed financial boost to small building firms. Indeed, it is vital that the bank harnesses the potential of the construction industry, especially SME housebuilders, to build new homes across all tenures in Scotland.”