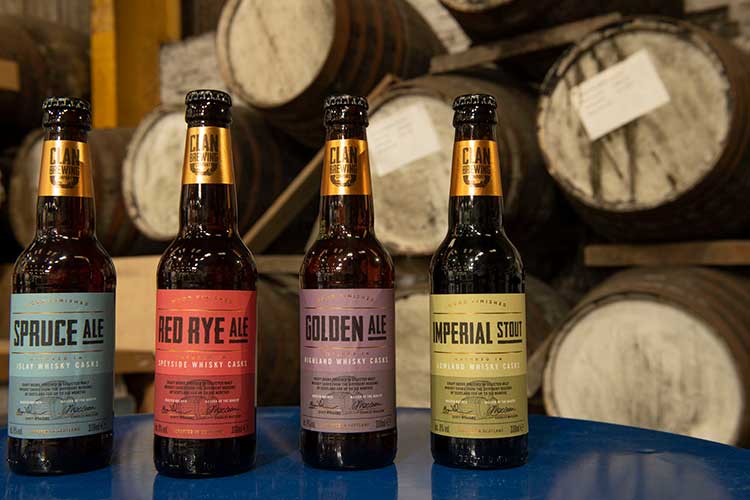 A Scottish craft beer producer has announced a “significant” export breakthrough into the US, the world’s largest craft beer market.

The Clan Brewing Co has said that following negotiations with US importers its range of whisky barrel-aged beers will be imported and distributed by the Copper Mountain Beverage Company.

The Glasgow-based firm said its range of beers will be unveiled to the US market at the National Beer Wholesalers Association trade show in Las Vegas. The NBWA is a hugely influential craft beer trade show that attracts about 4000 industry professionals, including national distributors and buyers, from all 50 states.

Chris Miller, director of the Clan Brewing Co, said: “This is a significant breakthrough for the Clan Brewing Co. We’re expectant of strong interest from buyers and the trade in general. One of the main hurdles faced by brewers wanting to export to the States is securing a US import and distribution partner, which we now have.”

Both Mr Williams and Ms MacLean played a key role in the development of the unique beers, which are aged in whisky barrels following the fermentation process. Mr Williams tailored the beer recipes to match the profiles of the second-fill whisky casks which were hand-selected by consultant Mr MacLean, author of 18 whisky books and whose other role includes Master of the Quaich. The beers pair four different beer styles with distinct whisky regions, explained Mr Miller, who is largely credited for pioneering the style during his time at Harviestoun.

Mr Miller added: “Whisky barrel-aged beers is a style that has over the past 20 years won a lot of attention and interest. With our close connections to key distilleries, through Charles MacLean, and exceptional brewing talent through Scott Williams, we can offer the authenticity, provenance and quality that’s so important to craft beer consumers. We’ve high hopes for the beers in the US, where there is always an appetite for innovation, as well as an appreciation for the high quality of Scottish food and drink products.”

Dale Stewart, of Copper Mountain, said: “This is an exciting development for Copper Mountain, and I’m looking forward to showcasing the Clan Brewing Co’s range of whisky barrel-aged beers. The NBWA always attracts an engaged crowd looking for new entrants to the market so I’m confident these innovative Scottish craft beers will attract a lot of interest.”

With the global beer market expected to reach $502.9 billion by 2025, Mr Miller said a solid foothold Stateside was a critical step towards Scottish craft brewers taking a larger slice of the US market, which is the world largest market for craft beer, both in terms of volume and revenue.

In the past five years JW Filshill International has driven sales of Scottish craft beer and spirits in key markets in the Asia-Pacific region, including in Japan, Hong Kong and China.

Earlier this year JW Filshill International attended the Hofex trade show in Hong Kong, which attracted more than 70,000 visitors, including buyers, importers and distributors from 70 countries in the Asia-Pacific region. In February, the Glasgow firm took part at the Gulfood food and drink expo in Dubai’s World Trade Fair, attended by 100,000 people.

Mr Miller said: “These events, whether it’s the NBWA trade fair in Las Vegas or Hofex in Hong Kong, and the meetings they enable, are critical to the ongoing export success of Scottish craft producers. They allow us to meet the key buyers and distributors. They allow us to put the beer or spirit in their hands and tell its story.”

Mr Miller also highlighted the support of Scottish Development International and Scotland Food and Drink in both attending these fairs and arranging meetings with potential buyers. “The support they’ve provided over the years has made a massive difference to the export potential of Scottish craft producers.”

Each of the four Clan Brewing Co beer recipes (IPA, Stout, Red Ale and Golden Ale) had its own flavour profile that matched the distinctive and subtle nature of the barrels sourced from Islay, Lowland, Speyside and Highland whisky casks. “These beers are intense, beautifully balanced and complex, full of aroma and flavour to be shared & enjoyed fireside with your appropriate malt whisky,” Mr Miller added.