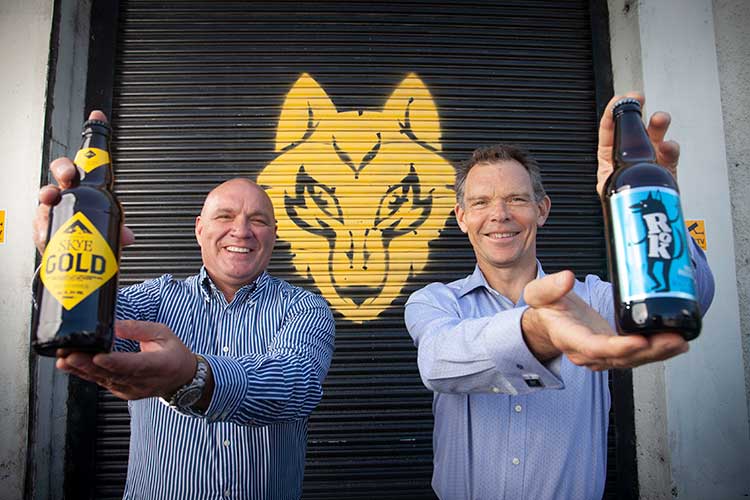 Isle of Skye Brewing Company has bought Black Wolf Brewery Limited and their beer brands from VC2 Brands, a move that will allow for continued growth and development for both brands and businesses.

The deal will see the Isle of Skye Brewing Company able to meet growing demand of their range, using Black Wolf’s established and robust bottling facilities. The move also provides the opportunity to explore other packaging solutions, which could lead to expanded SKUs and listings across the entire range.

Isle Of Skye Brewing has been operating since 1995 and was purchased by Kenny Webster in 2013 which has seen sales treble over this period after a full rebrand and introduction of a new range of beers.

Black Wolf Brewery operate from Throsk near Stirling and was previously known as TSA (Traditional Scottish Ales) before rebranding and changing their name in 2014, in homage to its Stirlingshire roots. Black Wolf produce a 12 strong range of craft, premium and heritage style brews including Rok IPA, Lomond Gold and 1488.

Before the purchase by Isle of Skye Brewing Company, Black Wolf Brewery was part of the VC2 Brands portfolio, which also includes Stivy’s Cider and Liqueur ranges, and Boë Gin.

Kenny Webster (Managing Director) of Isle of Skye Brewing Company said: “The purchase of Black Wolf Brewery from our friends at VC2 brands is a hugely positive move for both businesses. For Skye Brewing in particular, by having our own owned bottling facilities, we’ll be able to meet current growth demands and look at additional opportunities, such as introducing new SKUs which would be another growth area for the brand.

“Skye Brewing has gone from strength to strength since the first brew back in 1995. Our talented team will continue to produce our award-winning range on Skye, and we look forward to bringing a taste of the island to more people as we increase production thanks to the new deal.”

Graham Coull, Director of VC2 Brands: “We’ve worked with the team at Skye Brewing Company for a number of years and the deal we’ve brokered will secure the longevity, growth and future for both brands and wider businesses. This sale allows us to focus more on the Boë Gin brand which is growing very rapidly.”