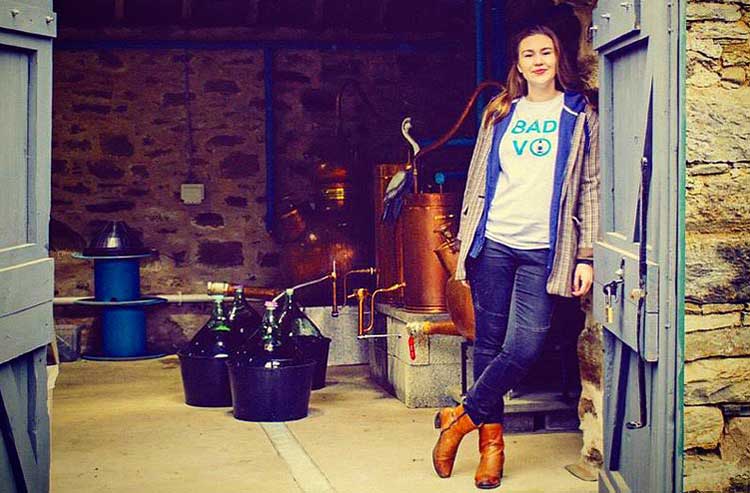 Helen Stewart, NFU Mutual and Scotland Food and Drink’s Inspirational Young Person of the Year 2018, talks to us about the latest for her company Badvo Distillery, the local and Scottish food and drink industry and what it was like to win the award.

At the age of just 18, Helen recognised that her family farm was in need of additional income in order to survive. With no money to invest, Helen obtained grants and worked seven days a week in order to develop a micro gin distillery as part of the Pitlochry, Perthshire farm.

Doing everything herself, from attended events to social media and distilling, Helen overcame a host of challenges and obstacles in order to build the distillery and was nicknamed the most successful ‘non-distiller’ as she was featured in magazines, books, and a documentary before she even launched.

Helen forages all of the botanicals she requires for the gin from the farm and now Badvo is growing its reputation among fans of Scottish gin.

Helen was presented with her certificate and £500 prize money at the Badvo Distillery by Kathryn Mutch, Marketing and Communications Manager at Scotland Food & Drink, Brian Lochhead, Sales Manager at NFU Mutual and Margaret Hebbourn, NFU Mutual Senior Agent for Perth in September 2018.

Here’s where she is a year on…

Q. You were awarded first prize in the NFU Mutual and Scotland Food and Drink Inspirational Young Person Award last year. As part of your prize, you received £500, what did you do with the money?

I used it to promote a new product launch – our Gin Postcards. It’s a five-piece collection of glass hipflask-esque bottles with different images on them representing what makes Badvo unique. The launch was a big success and the range sold out in two weeks. I’ve only just managed to get them back now.

Q. What have you been up to over the last year?

I launched Badvo in July last year after three years of planning and acquiring funding. From then I hired my mum, I won an award for the gin, our gin marmalade got an award, we brought out Christmas hampers, and we’ve basically happily selling bottles.

Q. How is Badvo progressing?

I’ve been spending a lot of my time planning this year, we have a couple of strategy meetings a week at least to go over ideas. We’ve got a substantial contract that we’ll be launching in May which I’ve been working on from January. We’ve also got another couple of projects in the works for this year so that’s keeping us extremely busy – especially during lambing on the farm. It’s really just a matter of planning and ensuring we can deliver the high standard we’ve set out with. Badvo is made from 100% hand foraged ingredients so I’m still feeling out the natural ceiling for responsible foraging.

Q. What do you think about the Scottish food and drink sector and its future?

I think I see it from both sides. As a farmer, I’m concerned about all of the uncertainty in the sector, particularly regarding the lack of solid plans with Brexit. I looked to diversify from the farm as I saw that as a stabilising influence – I was lucky that I could diversify in something I loved doing and had experience in. However, it does strike me as somewhat tragic that I find alcohol production in Scotland has a more certain future than food production. In terms of gin, the industry is bustling. It’s exciting and dynamic and every day I walk into my distillery and I’m amazed at how wonderful it all is. I hope to take that same energy back to my home farm.

Q. How about your local food and drink industry, what is there to be most positive about?

Our food and drink industry is so vibrant in Perthshire. People are passionate about their product and the quality of that product. This year I’ve really enjoyed seeing local businesses, especially smaller producers, getting more effective at communicating to the public. They’re not only unique but they’re able to brand themselves effectively. I have so many examples. There’s Cordon Farm – we were at a Christmas market there and were amazed at how a barn was made so chic for Christmas shopping. There’s Ballintaggart – a local hotel was bought over and renovated in such a beautiful and inspiring way. They sell our gin in an amazing cocktail there so we’ve been lucky to work with them. Finally, there’s also Bourtree – a local jam maker who we worked with to produce Badvo Gin Marmalade. Working with Jackie from Bourtree was amazing as I had no idea someone could be so talented at something like jam. It won Bronze at the World Marmalade Awards this year but I’m convinced it’ll take all the awards next year.

It makes my day to day so much fun when we have such inspiring local businesses to deal with. When I meet another company it’s not competitive, it’s collaborative, and I just love that about Perthshire. I’ve been so greatly supported by the local industry and community that it’s been a real pleasure moving back.

Q. Do you have any advice/words of wisdom for young people working in the food & drink sector in Scotland?

When I told people at 19 that I wanted to open a distillery there were those who immediately told me it was a bad idea – it was a saturated market or I was too young. The thing is the food and drink industry in Scotland is not saturated, it’s busy, but it’s busy because we’re good at it. To the latter, I don’t think you need to wait to get older to do what you love doing, age doesn’t somehow qualify you, if you find what you love doing then you should just get going. Besides, if you start young and fall flat on your face you can just pick yourself and try again – it’s really just your business.

Q. Do you have any advice for people entering the award for this year?

Think about what makes you unique and how you can communicate that effectively. I always say my gin is 100% hand foraged and expect people to know why that makes a difference- now I add that it gives it ‘a sweet herbaceous flavour with a wild mint finish’. Although you may be an expert in your field make sure you’re communicating what makes it different to the customer experience.

Q. Anything else you wish to add for the Award this year?

The trophy is massive.

“We are delighted to be running the award again this year in partnership with Scotland Food & Drink, giving us the opportunity to recognise the fantastic young people within this sector here in Scotland.

“Although it was no easy task, I am very much looking forward to be judging again after the high standard of entries submitted last year. This gave me a real insight into the scale of diversity and innovation amongst young people in food and drink, ranging from those working within a big company and challenging ideas, those pushing family-owned businesses to a higher level of sustainability, those just starting out with an innovative idea or those building and running their own established business.

“The way these driven, young minds approach work is inspiring and a real honour to be part of.”

The NFU Mutual and Scotland Food & Drink Inspirational Young Person Award 2019 is open for entries until 31st July 2019, with winners announced in September 2019. Entries, which should comprise the submission of up to 750 words can be submitted online at www.fooddrinkfort.scot and any individual between the ages of 16 and 26 who owns, works, or studies within a food and drink related business, organisation or institution can be nominated or enter on their own behalf. The winner will receive £500, with the second and third place finalists receiving £300 and £200 respectively.