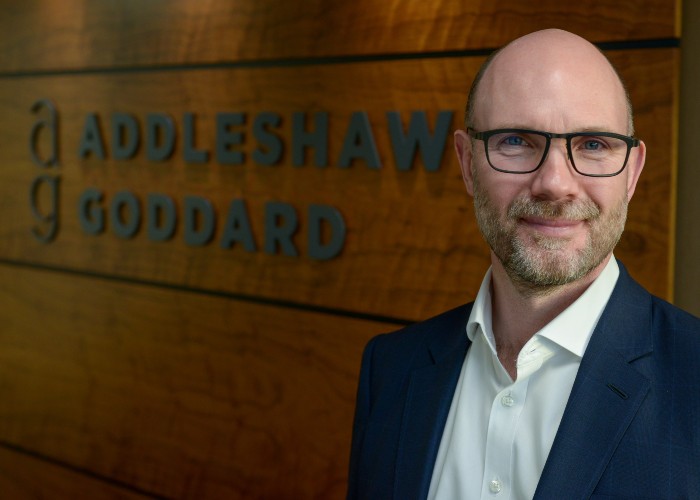 Shanks, who currently heads the firm’s Finance & Projects team north of the Border with a focus on the transactions in the energy sector, takes over leadership of Addleshaw Goddard’s Scottish operations from fellow Partner David Kirchin on 1 December.

Addleshaw Goddard counts offices in Edinburgh, Glasgow and Aberdeen among a global network of 16 offices, and established a presence in Scotland when it merged with Scottish firm HBJ in 2017.

Since then it has enjoyed remarkable growth, doubling its turnover in the country as a result of five consecutive years of double-digit income growth and employing 70% more solicitors.

Alan Shanks said: “I’m excited to be taking up this position and getting the opportunity, along with my colleagues, to drive forward the next stage of Addleshaw Goddard’s development in Scotland.

“Being an international firm with such a commitment to the local market offers something I believe is unrivalled for both our clients and our people. We have a brilliant team and continue to actively invest in talented lawyers across our offices so we can deliver the highest level of service the legal profession can offer to our clients, wherever they are doing business.”

Shanks, who played a central role in the merger which brought Addleshaw Goddard to the country, having been at HBJ since 1998, is recognised as a leading lawyer in his field by both of the independent legal directories, Chambers UK and The Legal 500 and is qualified as a solicitor in England & Wales as well as Scotland.

He will combine his new role with his existing work, which sees him specialise in financing, acquisition & disposals and joint ventures for clients in the energy sector, and also act for a wide range of corporate clients and financial institutions in the UK and internationally.

John Joyce, Addleshaw Goddard’s Managing Partner, said: “Alan is such a well-respected Partner, within Addleshaw Goddard, the profession and the wider market, and his profile and experience made him the perfect choice to take over the mantle from David Kirchin.

“Under David’s direction we have materially grown the scale, scope and profile of Addleshaw Goddard in Scotland over a relatively short period and I have no doubt that Alan will bring energy, ideas and experience to ensure that AG establishes its position at the top of the market.”

Kirchin, who will remain a key figure in the corporate team in Scotland, will be one of a number of former HBJ partners in a senior firm-wide position at the firm when he becomes Divisional Managing Partner for Corporate & Commercial in the new year.