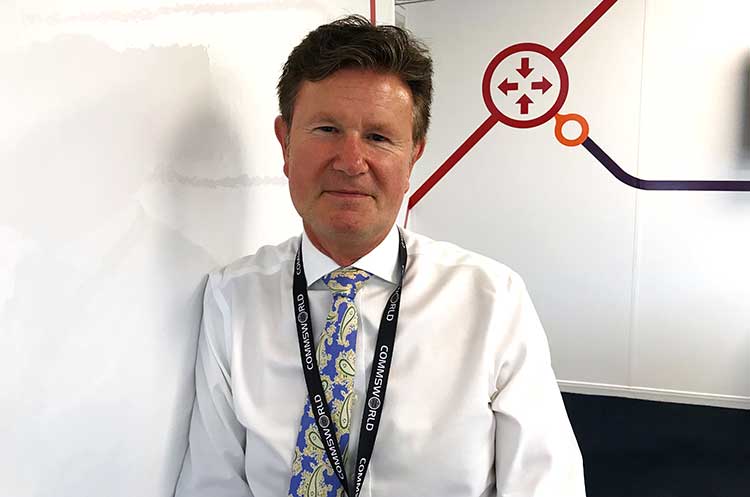 A Scottish telecoms and network firm has recruited one of the sector’s most experienced sales professionals to drive growth from London.

Bringing close to four decades of experience, Keith Barrett joins Commsworld from his role as Head of Wholesale at aql Telecommunications in a move that will see him take the firm to new markets and opportunities in the south of England and beyond.

He’ll head up the firm’s new prime central London office, in Eccleston Square near Victoria Station – where he’ll look to build on his relationships within the industry. This will be foremost with carriers and internet service providers, who could look to utilise Commsworld’s ultra-fast “Tier 1” fluency network – the UK’s largest privately owned optical core fibre network.

Keith, from Gillingham, Kent, has previously held senior roles with Gamma, Verizon and Three in a career that has placed him at the forefront of one of the UK’s fastest-changing and growing sectors.

He said: “This was an offer I just couldn’t turn down. Commsworld’s growth and investment in recent years means it can offer the very best connectivity and service to any organisation in the UK.

“It’s a well-established brand that embraces respect and integrity at all levels of the business community. Yet unlike many disruptors, it has years and years of experience and able to deliver transformative projects throughout the UK and beyond.

“The potential therefore is tremendous – and I can’t wait to get fully underway.”

In helping deliver major council ICT contracts in Glasgow, Edinburgh and the Scottish Borders, Commsworld has helped to radically modernise networks in these areas, with Scotland’s two largest cities increasingly recognised globally as centres of tech, education and business excellence.

Thanks to that work in Edinburgh alone, 324 council owned sites including 130 schools now benefit from bandwidth in the region of 100 times faster than the UK average and 17,000 businesses also have the opportunity to use the network.

Its transformative work in Glasgow is on an even larger scale and at the time was the UK’s largest public sector contract of its type.

As well as its involvement in major UK cities, Commsworld revolutionised the Scottish Borders’ economy by updating the area’s outdated infrastructure to provide speeds comparable to any major UK city.

“He’s exactly what we need to open up markets and start to develop a level of awareness and reputation in the business community that we enjoy in Scotland.”

The move comes following confirmation of the firm’s most successful year ever, with revenues breaking through the £20 million barrier – a 41% increase on the previous year along with a threefold growth in profits.

It recently secured two lots on the new £5billion UK government telecoms and network framework, NS2, meaning it can benefit from a streamlined procurement process for the entirety of the UK public sector, associated bodies and agencies, the voluntary sector and charities.

Commsworld is one of the country’s most reputable providers of digital connectivity and offers a market disruptive service to rival legacy network providers.

Its next generation network is built specifically for businesses and has revolutionised the speed and resilience of internet for firms across the UK, and in particular Scotland, where it has operated for more than 20 years.

Commsworld’s connectivity products and services are underpinned by its optical core network and fully managed cloud and security solutions.

The firm, founded in 1994, is headquartered in Edinburgh, though has bases in London, Glasgow and  Aberdeen and has grown to more than 100 staff.