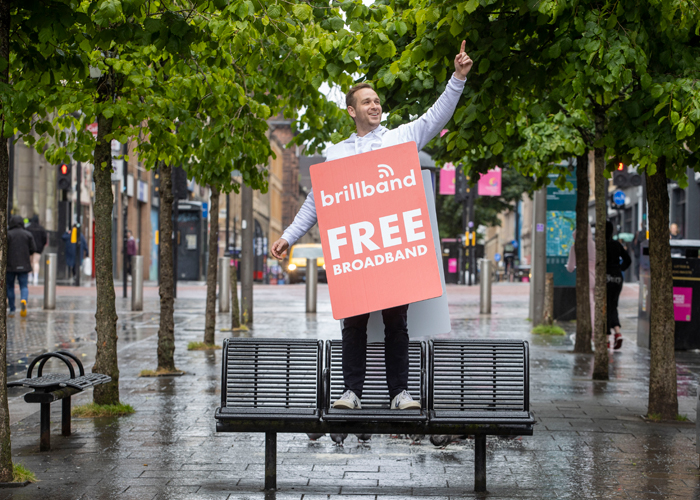 HUNDREDS of people have signed up to a pioneering trial by Brillband – the company behind the ‘world’s first’ app-based broadband technology.

A waiting list to join the three-month, no obligation, trial is now open, and already hundreds of people have added their name in hope of testing the ground-breaking tech, which will enable consumers to control their connection to the 1GB, full-fibre service from their mobile phone or tablet device.

The Brillband trial will begin later this year ahead of the full launch of the £35 per month ultra-fast broadband service, which creator and Brillband CEO Duncan Di Biase says will change the way people think about broadband.

The broadband entrepreneur hopes the trial also will help hard-hit households during the cost-of-living crisis.

He said: “The broadband industry standard to this point has been the faster the speed, the higher the price.”

“You only need to look at BT or Virgin’s broadband packages to see that your prices will increase after your contract ends. And as for what’s hidden in the fine print, consumers are regularly met with annual price hikes based on contractual terms they weren’t made fully aware of.”

“At Brillband we’re doing things differently. It’s one speed – the highest we can offer – at one reasonable price. It’s about fairness, transparency, and simplicity.”

“Consumer sites such as Money Saving Expert, warn customers against going for higher-speed packages purely on price. That shouldn’t need to be the case and that’s what we’re trying to change.

“Ultimately, people just want broadband that works for their needs – be it browsing, gaming, downloads, or working from home – with no fuss at a fair price. That’s where we come in.”

“All households are feeling the pinch right now, and by signing up to the Brillband trial and helping us test the technology, they can save more than £100. Typically, more than a third of consumers are either out of contract or on rolling contracts with their existing broadband providers and paying more than they need to. This trial could come along at just the right time for them.”

“They’ll also be part of what could become a truly significant moment in internet service provision, as well as finding out just how well broadband can be done. Brillband is the future of broadband, and we’re so confident people will love it, that the first three months is on us – with no obligation to stay. If they’re not sure, they can walk away.”

“I want Brillband to become Europe’s most loved broadband provider – but it all starts here in Glasgow and Renfrewshire.”

Internet Services Providers (ISP) offering comparable 900mbps FTTP (Fibre To The Premises) connections – including BT, Talk Talk and Shell Energy – typically charge in excess of £49.99 per month (on an 18 month contract). Brillband’s one price for life structure means they charge a single rate for the fastest speed – for as long as the customer is with the provider.

The Glasgow-founded ISP is also focused on a fair deal for employees, and is currently recruiting for customer service operatives who will be paid £25,000 – more than 20% above the UK broadband industry average £20,000 per year.

And Di Biase believes there is no better place to launch the service than Glasgow and the surrounding area as he seeks to build the best customer service team in the country.

Brillband’s test phase will begin across Glasgow and Renfrewshire in July. Those interested in joining the trial can sign up, and find out more visit brillband.com/glasgow.