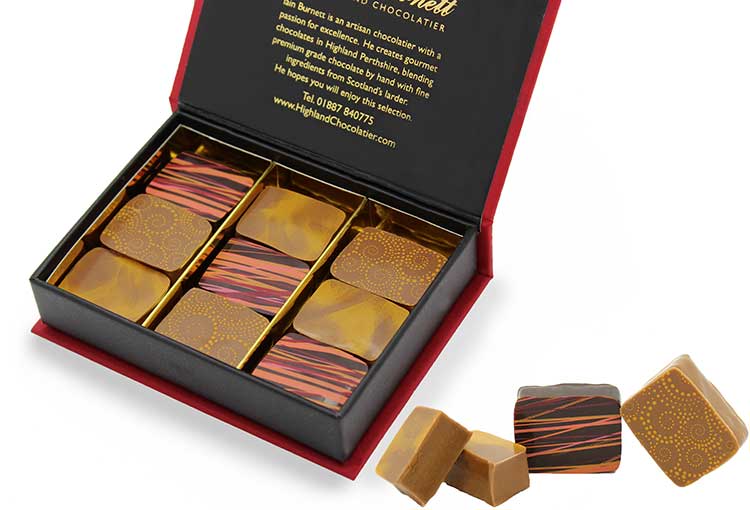 A small gourmet chocolatier from the Scottish Highlands has received a hat trick of three awards from the Academy of Chocolate.

Iain Burnett Highland Chocolatier, working from his specially designed chocolate kitchen in Grandtully, Highland Perthshire, has received an outstanding three awards for his unique Velvet Truffles.  The Academy of Chocolate received record entries from over 46 countries, with Master Chocolatier Iain Burnett gaining the highest award in Scotland, with only one other Scottish chocolatier receiving an award.

Iain Burnett spent two years developing his latest two creations.  The Pure Caramelised Ganache with its uncommonly smooth texture is Iain’s ganache tribute to classic caramel – with creamy notes, evocative of perfectly browned butterscotch.  And the Sea-Salted Caramelised Velvet Truffle introduces an added dimension to the caramelised ganache as it finishes distinctively with small lingering bursts of sea salt.  Both received awards together with one of his first ever chocolates, the Cocoa Nib Praline.

Iain said, “it’s really encouraging that years meticulously selecting the right ingredients and best methods have been recognised on such an international level.” About his latest work, Iain says, “I really wanted to discover how to caramelise the ganache itself – not just another sugary caramel. I spent so long investigating the science of caramelisation and so many old methods.  The breakthrough came by using a fresh cream and unique milk chocolate which both contain natural notes of caramel, then discovering how to caramelise the ganache itself.  From the excited responses I’ve had from testing it on some of the UK’s top chefs, I have a feeling that the salted caramel version is going to be very popular. I’ve found a way to add tiny sea salt crystals to make it ‘pop’ out beautifully.”

The Academy of Chocolate is an organisation for chocolate professionals who promote only the finest cocoa and chocolate confectionery of exquisite standards.  Its prestigious awards are now an important event in the chocolate calendar with entries sent in from top chocolatiers all over the world, with over 100 expert judges tasting and scoring the entries.  Its chairman, Sara Jayne Stanes OBE, said “the response from across the whole world of chocolate has been overwhelming. Not only has the number of entries soared, so too have the levels of innovation and quality.”