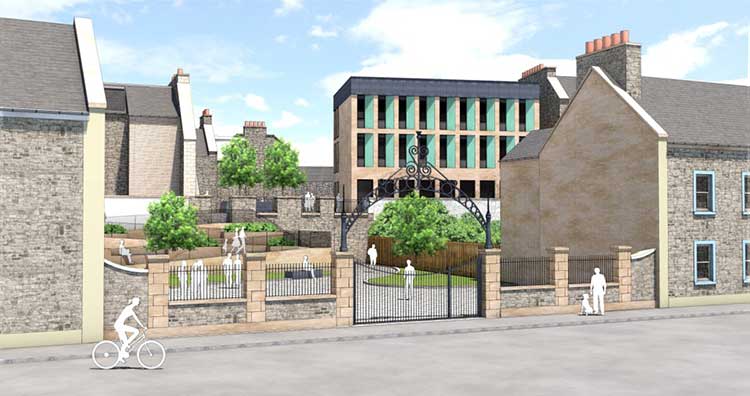 A CGI of Hawick business incubator

Plans to turn a derelict former department store building in Hawick town centre into a business incubator centre have been given the go ahead.

The Scottish Borders Council project, funded by the Scottish Government, will result in the demolition of several disused properties and the development of a new three-story building, which will provide a hub and business space for up to 17 small and start-up companies.

The former Armstrong’s department store building in Oliver Crescent and two former church buildings in Teviot Crescent will be removed to make way for the new centre, which has the potential to support up to 25 full time equivalent jobs.

The project is one of four to have been supported by Scottish Government funding of £3.6million for Hawick in June 2017. This built upon the development of the Hawick Action Plan by the Council, local businesses and community groups.

Councillor Mark Rowley, Scottish Borders Council’s Executive Member for Business and Economic Development, said: “Not only will this project create new jobs it will redevelop an important town centre site that has been an eyesore for many years.

“The office units to be developed will enable existing small businesses to grow and give entrepreneurs the chance to set up within a dedicated business space, network and collaborate with other businesses on a daily basis.

The redevelopment of the site will include a small public space and pedestrian access through from the heart of the town to the Wee Haugh and on to Commercial Road.

The £3.6m from the Scottish Government for Hawick has also been used to develop four industrial units at the edge of the town at Galalaw Business Park. Following more than 20 enquiries the first tenant moved in at the end of 2018 and three of the four units are now occupied.

In addition, the Council committed to upgrading business facilities at the town’s Tower Mill and undertaking feasibility studies for the regeneration of other key properties to inform potential investors.