Harper Macleod expands into Moray as Wink & Mackenzie comes on board 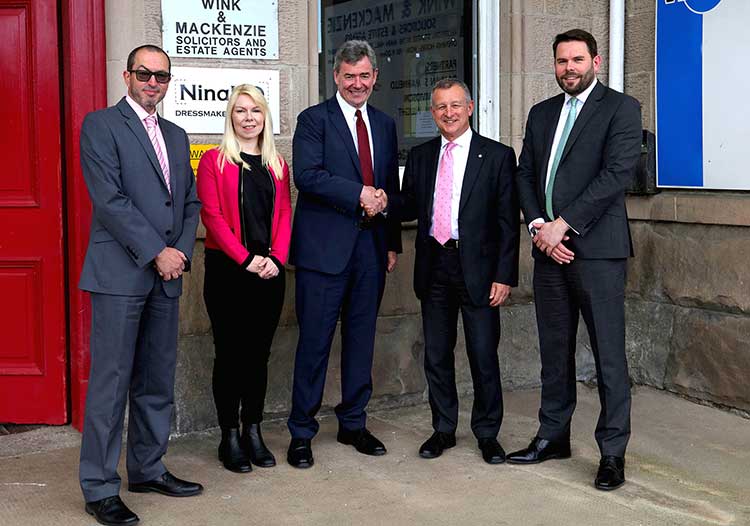 Law firm, Harper Macleod LLP, is expanding into Moray after acquiring the business of one of the area’s oldest legal practices, Wink & Mackenzie.

Partners Ian Davidson and Lauren Wright will be joined by W&M’s 15-strong staff in becoming part of Harper Macleod from 2 September, adding to the firm’s existing offices in Inverness, Thurso, Lerwick, Glasgow and Edinburgh. Current W&M Partner Damian Marinello will also be joining Harper Macleod as a consultant.

Harper Macleod Chairman Professor Lorne Crerar CBE said: “This is a hugely exciting opportunity both for Harper Macleod and the team at Wink & Mackenzie, which is one of the leading firms in Moray. We have worked closely together for a number of years and joining forces was a natural step to take for both parties.

“There is already a great alignment in what we do I believe the move will benefit our joint client base, as well as anyone looking to access advice of the highest quality and value on their doorstep in Elgin and throughout Moray. As well as the services Wink & Mackenzie already provides, it will allow us to extend the full Harper Macleod offering of commercial and personal legal services to the local market.

“Harper Macleod has had a permanent, growing presence in the Highlands and Islands for 15 years now and our unique footprint, in Inverness, Thurso, Lerwick and now Elgin, gives us a competitive advantage over the other current and emerging legal services providers in the region.”

The firm will be retaining its Elgin premises and in Moray will initially operate as Harper Macleod incorporating Wink & Mackenzie.

Ian Davidson of W&M said he was delighted to join forces with one of Scotland’s leading law firms. He said: “Our firms have had a strong working relationship for some time and we already know that we’re a good match in terms of our ethos and the way we do business. It’s also important to us and to our clients that we remain in the same location with the same ethos. We want to deliver and develop the very best legal and estate agency services for our clients here in Moray in the long term and as part of Harper Macleod we’ll be able to continue what we’re already doing and also offer much more.

“The team at Harper Macleod already know the area well and being part of one of the country’s best legal brands will give our existing and new clients access to a greater range of expertise and specialist advice than we alone can provide currently.”

The move is expected to add a seven-figure sum to Harper Macleod’s overall turnover, with the firm’s headcount numbering around 400 people across Scotland.

Harper Macleod already acts for a significant number of clients in Moray, and was also recently appointed to the panel of law firms from which Moray Council will seek external legal advice.

Martin Darroch, Chief Executive of Harper Macleod, explained the strategy behind the firm extending its office network in the Highlands and Islands. He said: “Since we established a Highland presence back in 2004, Moray has been a very important area for us and somewhere we know very well. As the leading full service legal brand in the Highlands and Islands the possibility of creating a permanent presence here is something we’ve been considering for some time and taking the opportunity to bring on board our friends at Wink & Mackenzie is a natural step to take.

“Moray is home to some of Scotland’s leading businesses and has a thriving economy, particularly in areas such as food and drink, manufacturing, tourism and, of course, energy and natural resources. There are fantastic opportunities and Harper Macleod has the specialist knowledge and depth of resource to help businesses and organisations here make the most of those, as well as advising local individuals and families on all their legal needs.

“I am confident that the Moray economy is going to grow and grow and we are excited about being a part of that.”

Lindsays lawyers get on their bikes to support Cash for Kids