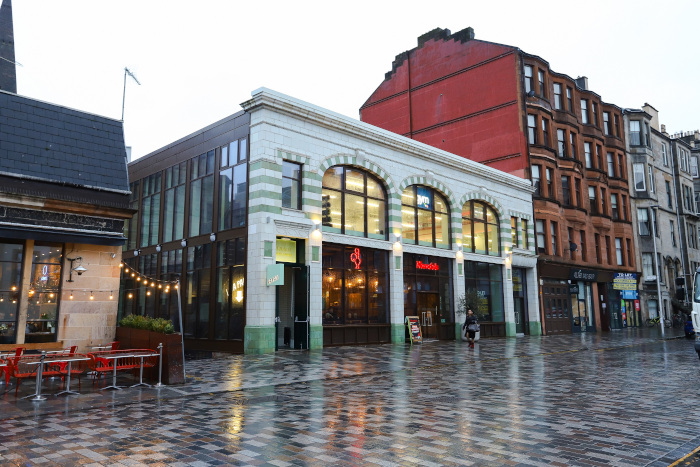 THE RESTORATION of the iconic Botanic Garden Garage in Glasgow’s West End, on which Hardies Property & Construction Consultants acted as Project Manager and Quantity Surveyor for Arnold Clark Automobiles, has been named as a finalist in the Regeneration Project of the Year at the Scottish Property Awards 2020.

The Botanic Garden Garage, with its Venetian style arched windows, clad in green and white faience tiles, dating back to 1911, has been brought back to existence, to play its part in Glasgow’s thriving West End.

The original garage lay dormant for many years, neglected and exposed to the elements. Exacerbated by the ad hoc, bygone construction methods, the steel structure and concrete finishes were left it in a severely dilapidated condition.

Now restored to three restaurants and a gym, retaining the key historic features of the Grade A Listed building has added value to the local urban fabric and benefited the surrounding commercial community.

Murray Warner, Partner at Hardies, said: “We were delighted to be involved with this restoration project on Glasgow’s Vinicombe Street which effectively preserves much of the historical fabric of the Botanic Garden Garage while giving it a whole new lease of life for the modern age.”

Derek Cuthbertson, Estates Manager at Arnold Clark Automobiles, added: “It was a pleasure to work alongside Hardies on such a challenging project. The design team worked extremely hard to ensure the historic building was restored back to its former glory.”

The other key partner involved in the project for Arnold Clark Automobiles was lead consultant Keppie Design.