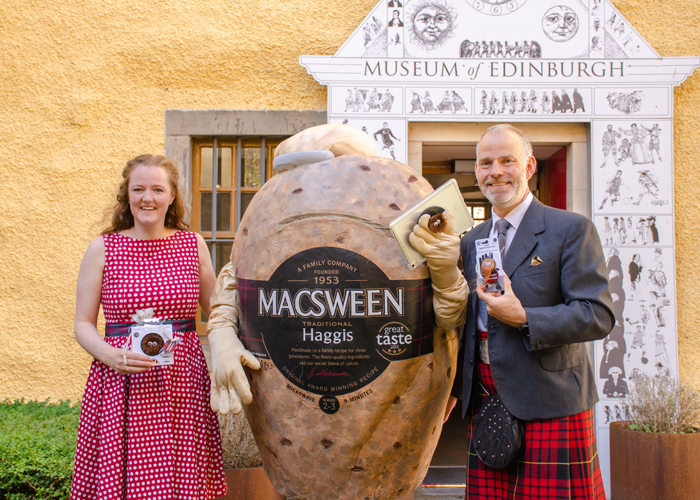 Alison Grieve and James Macsween promoting the Haggis holder at the Museum of Edinburgh, accompanied by a mutual friend!

TWO multi-award-winning Edinburgh businesses have collaborated to create a furry friend to take the strain out of using mobile phones and tablets.

Hamish the Haggis Holder is the brainchild of G-Hold and Macsween Haggis as a fun way to mark this year’s Edinburgh Festival.

G-Hold manufacture ergonomic holders for mobile phones and tablets, used by TV presenters such as Suzi Perry, Eilidh Barbour and Lee McKenzie, which greatly reduce the strain placed on users’ hands and wrists by securing the fingers in a relaxed position, while Macsween is one of Scotland’s most iconic food brands.

The seemingly unlikely collaborators have come together to create this unique design of Hamish the Haggis and are on sale at The Museum of Edinburgh on Cannongate.

G-Hold founder and CEO Alison Grieve said: “We’ve long admired Macsween. Despite coming from completely different industries, I feel we are companies with a similar ethos and values – made in Scotland, exporting globally with sustainable practices and supporting the local community.”

“We’re really excited about collaborating with them on this fun new design.”

“It’s been a tough couple of years for the business community and there is something liberating about doing something purely fun, creating a lovable character celebrating Scotland and its produce.”

“The science behind G-Hold clearly demonstrates the health benefits of using our patented holders on mobile phones and tablets, and it’s great to find a fun way to get that message across, with Edinburgh visitors now able to take a little bit of Scotland away with them on their phones or tablets.”

“Macsween of Edinburgh has constantly been pioneering Scotland’s National Dish, so when given the opportunity to collaborate with another pioneering Scottish brand like G-Hold, the answer was obvious,” he explained.

“Haggis has a global reputation, and whether it is manufactured or reared does not matter. Having this opportunity with Alison was another chance to have fun and keep the Haggis mystique alive.”

The Hamish the Haggis phone and tablet holders are priced £19.99 and £24.95 respectively, and available now from The Museum of Edinburgh shop or online at www.g-hold.com