Green hydrogen-powered festivals get the green light from audiences 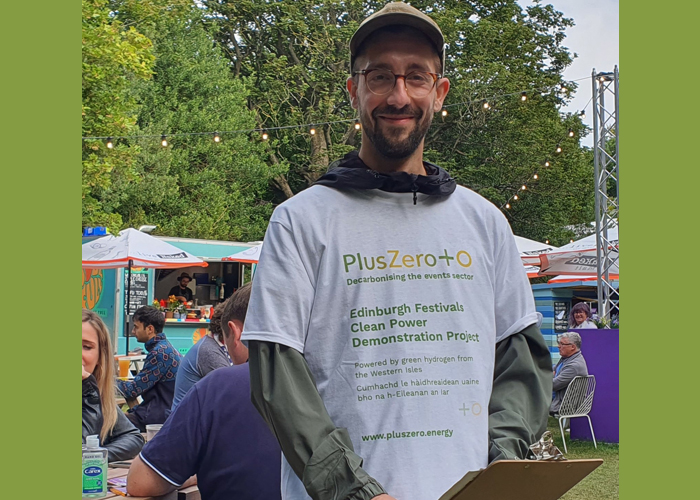 THE limitless potential of Scottish Green Hydrogen has taken a major step forward following a new report that has found overwhelming support among festival audiences for the use of Green Hydrogen as a clean-fuel alternative to diesel generators.

The University of Edinburgh Report, commissioned by Scottish clean power start-up PlusZero with the support of the Scottish Government and EU NESOI Project grant funding, found a strong preference among festival-goers for renewable sources of power at outdoor events, with a clear majority indicating that Green Hydrogen generators are less negatively impactful on the environment and audience health than diesel generators.

PlusZero, launched in 2021 by founder David Amos, creates portable, zero-carbon generators that are powered by Green Hydrogen from renewable electricity generated on the Scottish islands, with the aim of replacing greenhouse gas-emitting diesel generators.

PlusZero’s range of combustion-engine based generators offer the fastest, most reliable and cost effective approach to meeting the varied demand for carbon-zero, portable power in the events, outdoor filming, construction and industrial sectors.

“Green Hydrogen has long been recognised as having vast potential as part of Scotland’s renewable energy mix. Having completed a series of successful demonstrations at the Edinburgh International Festival, COP26 and Edinburgh Castle in 2021, PlusZero has already turned that potential into an innovative, ready-to-go Green Hydrogen solution that can deliver clean power, wherever it’s needed.”

“This pioneering Report from The University of Edinburgh shows that there is support among festival audiences for Green Hydrogen as a viable clean fuel alternative to polluting diesel generators at outdoor events – opening up a major new market for Scottish Green Hydrogen.”

Key findings from the Report include:

Reflecting on the findings, Report Author Professor Dan van der Horst, School of GeoSciences at The University of Edinburgh, said:

“It was really encouraging to find widespread public support for greening up festivals through renewables, like gensets running on Green Hydrogen.”

“PlusZero is working with some of the most experienced and creative people in the Green Hydrogen sector including our public sector and community partners in the Western Isles. We believe that collaboration between committed and expert partners is the best way to achieve the rapid transition to the clean energy future that is essential for our planet.”

“What this Report tells us is that audiences share our core values of collaboration, confidence and respect for the environment.”

“Building on the findings of this Report, and working closely with our events partners, we are hugely excited to utilise our technology and make hydrogen happen at a number of high-profile carbon-zero events throughout 2022.”

“Hydrogen has an important role to play in our journey to becoming a net zero economy and the Scottish Government is fully committed to helping the sector develop and grow.”

“There are a wide range of applications for renewable hydrogen as part of our energy transition, and this research demonstrates strong public support for the technology. In addition to its potential to decarbonise large-scale events it will play an increasingly important role in other sectors such as transport and industry.”

“Our Hydrogen Action Plan sets out how we will work collaboratively with the energy sector to drive progress over the next five years, supporting enterprises like PlusZero to continue to innovate and develop renewable hydrogen technology to help deliver Scotland’s climate obligations.”