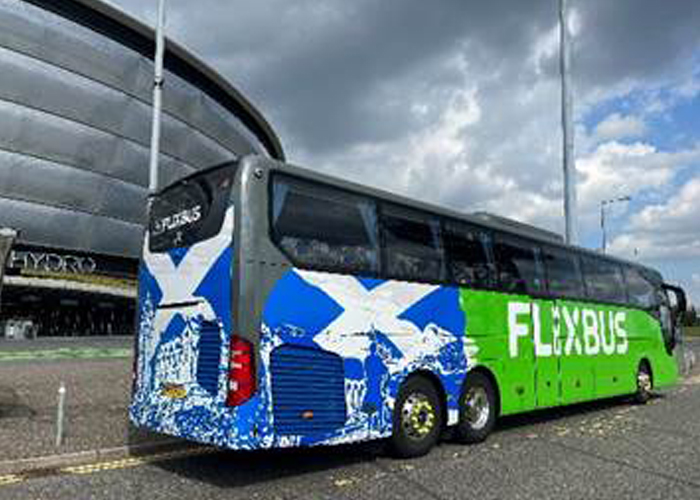 A new Aberdeen bus service to Glasgow has launched

GLOBAL leader in coach travel FlixBus has announced its entrance to the Scottish domestic market, launching a new daily route between Glasgow and Aberdeen from 8 August 2022.

The green coach brand, which providers passengers with journeys to 2,400 destinations in 40 countries, has revealed it will begin its new network serving Scottish cities four times a day.

With tickets starting from just 99p for the whole of August, FlixBus’ bold new venture will provide daily connections to and from Glasgow, Stirling, Perth, and Aberdeen.

Marking the occasion, FlixBus is will also be unveiling a unique designed coach in time for the launch – complete with the Saltire and famous landmarks such Glenfinnan Viaduct and Ben Nevis – which will be a regular part of fleet driving the route.

Andreas Schorling, Managing Director of FlixBus UK said: “We have made no secret that we want to be the biggest coach brand in the whole of the UK, and our launch in Scotland is a cornerstone of our growth strategy. We know from our experience of cross-border routes that our service is a natural fit with the Scottish market.”

The eco-friendly transport network will be operated by Scotland’s largest independent bus company, McGill’s, as part of its partnership with FlixBus, which began in 2021.

McGill’s operates several cross-border FlixBus routes to and from cities including Sheffield and Manchester, and recently launched a daily summer service between London, Glasgow and Edinburgh.

Ralph Roberts, CEO of McGill’s said: “Our established partnership with FlixBus has gone from strength to strength, and we are delighted to be working together with the global brand to deliver this ambitious project and offer high quality transport connections to the people of Scotland.”

“McGill’s has always been the obvious choice of partner to ensure the service is a success, and we’re proud to be launching our affordable, reliable and sustainable coach network in Scotland with their team,” Schorling added.

Born as a tech start-up in Germany, FlixBus has been revolutionising the travel industry since 2013 with its frictionless digital booking systems, live coach tracking and a state-of-the-art App for consumers.

The introduction of the new dedicated Scottish line means the FlixBus network now serves over 40 destinations across the UK.

Tickets on the new route can be purchased at www.flixbus.co.uk, or the FlixBus App. Concessions using NEC cards will also be accepted on the service.