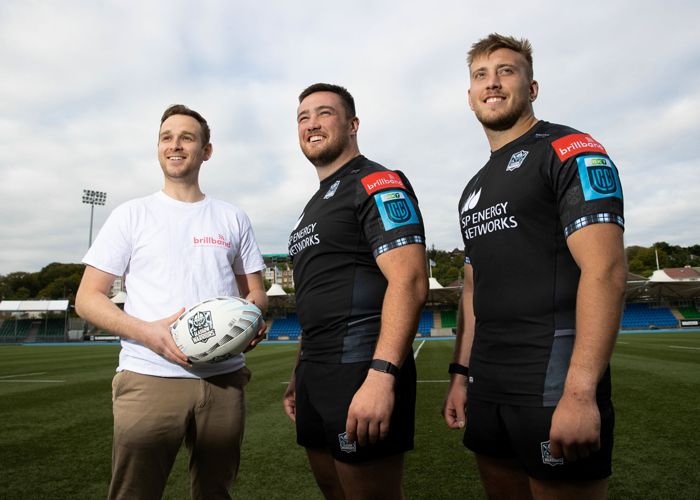 The Glasgow-based company’s logo will appear on the left sleeve of Glasgow Warriors home and away kits for the next three seasons – starting with Cardiff Rugby’s visit to Scotstoun this Friday (September 23).

The internet provider has announced the deal ahead of its official launch next month. Hundreds of households in Glasgow and Renfrewshire have already joined the waiting list in hope of testing the firm’s ground-breaking tech.

After the pioneering trial, during which participants will receive three months free broadband, all customers will receive a fixed-rate tariff of £35 for 900Mbps connection – nearly half the price offered by some of the biggest players in the broadband industry.

The disruptive start-up has partnered with Glasgow Warriors to celebrate its launch in the city, and to support its ambitious growth plans over the next three years.

“Glasgow Warriors is the perfect partnership for Brillband – we have shared values as we both want to make a positive impact in Glasgow.”

“For me, it was a no-brainer to launch in Glasgow, and it was just as simple a decision to connect with a rugby club which is such a massive part of the community.”

“This will be a true partnership in every sense. We look forward to delighting Warriors fans and the wider community with a whole host of surprises in the months ahead. ”

Glasgow Warriors Managing Director Al Kellock added: “We are delighted to partner with an innovative Glasgow based business.”

“Having spoken to Brillband we are excited by the plans that we have in store for our fans for the next three seasons.”

“We are looking forward to running out with Brillband on our sleeves on Friday night and for the seasons ahead.”

Brillband’s test phase will begin across Glasgow and Renfrewshire in October.