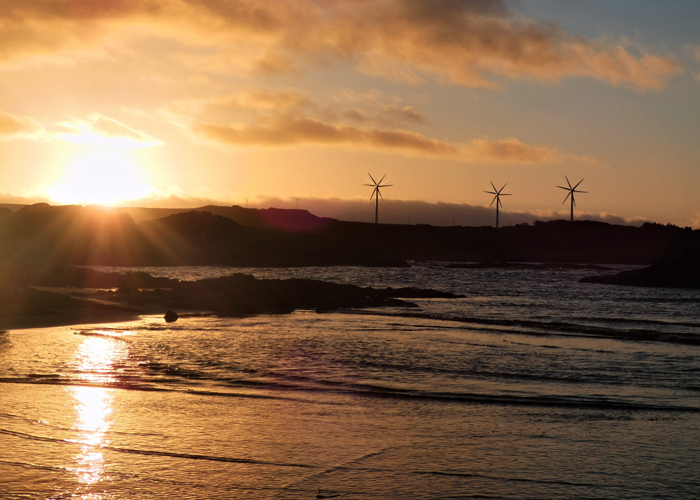 Gigha Renewable Energy Limited (GREL), a subsidiary company of the Isle of Gigha Heritage Trust (IGHT), was established to purchase three second-hand Vestas V27 turbines from a wind farm in Cumbria in 2004. The turbines have spent over 18 years on Gigha, but the machines are a remarkable 30 years old this month. Since they have been in operation, the three turbines have provided significant income to the community Trust and have allowed the island to prosper. The three turbines are known locally as the Dancing Ladies, and individually named Faith, Hope and Charity. The Dancing Ladies turn alongside one Enercon E33 turbine which was installed by another subsidiary company of the Trust, Gigha Green Power Limited, in 2011.

The turbines are accredited through the Renewables Obligation (ROC) scheme. Every year, any profits generated by GREL are voted up to the Trust which then uses these funds to maintain and improve Gigha. Profits from GREL have supported housing improvements, estate maintenance, and employment opportunities on the island. GREL also provides a Community Fund which supports community initiatives and projects that better the lives of island residents.

As the Dancing Ladies become older, GREL is reviewing opportunities to replace the turbines to ensure that the community still has access to the funds raised by the renewable energy sales. GREL and IGHT hope to continue working with Vestas as their model has proven to work well on Gigha, lasting 10 years beyond their expectancy and still turning today.

Keith Wallace, Senior Director Onshore Services UK & Ireland for Vestas and Country Manager
said: “The three Dancing Ladies are a remarkable success story and Vestas are happy to have been a part of it. Gigha has demonstrated how wind turbines can serve a new purpose in a new location, how they can significantly extend their lifetime and how successful community projects are. Once again, this shows how Scotland is working towards a sustainable future thanks to wind power, demonstrating economic achievement in the process. I’m convinced that the success story of Gigha, and indeed wind power in the UK, is one whose dance has only just begun.”

GREL is also reviewing opportunities to directly supply its energy on the island, rather than exporting all of its energy to the National Grid, as it does currently. Further large investment is needed to secure this as the community do not own the electrical cables or infrastructure.

Andy Clements, Renewables Officer for GREL said: “The Dancing Ladies have been a reliable and important source of income to the community over the last 18 years. The island would not be where it is today without them. We have been working on an Options Appraisal to look at replacing the Dancing Ladies, as well as other avenues such as privately supplying a local business and even looking into the feasibility of hydrogen. Hopefully in the near future GREL will be able to upgrade the V27’s to ensure the future of the island is safeguarded.”