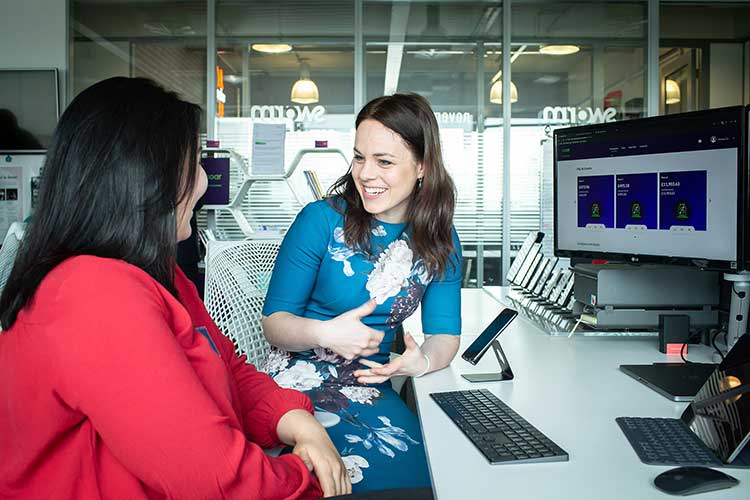 Fintech disruptor Soar has been awarded a £450,000 Research and Development (R&D) grant from Scottish Enterprise.

The Glasgow based company is developing a cloud-based and fully-integrated banking platform for credit unions and other not-for-profit banking organisations.

The grant has also led to the creation of 15 additional jobs – bringing Soar’s total headcount to 22 – and will allow it to target new overseas markets including Ireland, Germany, the United States, Canada and Australia.

Soar’s new software will be the first of its kind, allowing ethical banking institutions to analyse and manage data more effectively and securely, use artificial intelligence, make better and faster loan decisions and offer state-of-the-art online and mobile banking products to their members.

Public Finance and Digital Economy Minister, Kate Forbes, visited Soar’s Glasgow office to meet the team and representatives from some of the credit unions the company works with. She said: “I am delighted that this £450,000 research and development grant, funded by Scottish Enterprise, will support Soar’s ambitious plans to develop an innovative platform for Credit Unions and other ethical banks.

“As the UK’s leading destination for foreign direct investments outside of London, and the best in the UK for attracting high value R&D projects, the Scottish Government has set an ambitious target to double Business Expenditure Research and Development to £1.75 billion by 2025 and have boosted existing R&D grant funding by £45 million between 2018 and 2021- an increase of almost 70%.

“Projects like Soar’s help sustain Scotland’s international reputation for innovation, moving us closer towards achieving an even more elevated status in the global innovation sector.”

Established just over a year ago, Soar has enjoyed rapid growth since its launch. It has already developed a successful mobile banking app for credit unions, helping them to stand out in an increasingly competitive financial services market and to attract younger members.

Andrew Duncan, Executive Chairman of Soar said: “The financial services market is changing at an alarming rate for ethical providers. Typically, they don’t have the knowledge or the significant IT budgets required to launch apps that are on par with online banks such as Monzo and Revolut.

“By next year over 80% of financial transactions will be carried out on smartphones. Ethical providers need to leap forward to become digital first and remain relevant for the next generation of savers and borrowers – millennials. This grant will help Soar build cost effective and cutting edge solutions that will help the whole market compete and grow in this fast paced sector.”

Beth Welsh, Business Development Manager for Pioneer Mutual Credit Union in Barrhead, said: “We’re big believers in forward-thinking finance and new technology and have been working with Soar for the last few months. They have a deep understanding of the fintech sector, which is completely new for most credit unions and can be a bit scary – but it’s also great to work with an organisation that fully understands credit unions and our ethos. Our members will see great benefits such as improved online access and a digital app. It will also help make applying for loans a much quicker, smoother process, hopefully steering people towards a credit union rather than high-interest payday lenders.”

Jim Watson, Scottish Enterprise’s Director of Innovation, said: “The success of Soar is testament to the vibrant fintech scene here in Scotland, with the company going from strength to strength since it launched just over a year ago.

“As the national economic development agency, we want to help build a fairer Scotland. This R&D grant will allow Soar to develop further innovative products so that ethical banking organisations – often lifelines for our most vulnerable communities – can remain competitive against the new wave of online banks.”