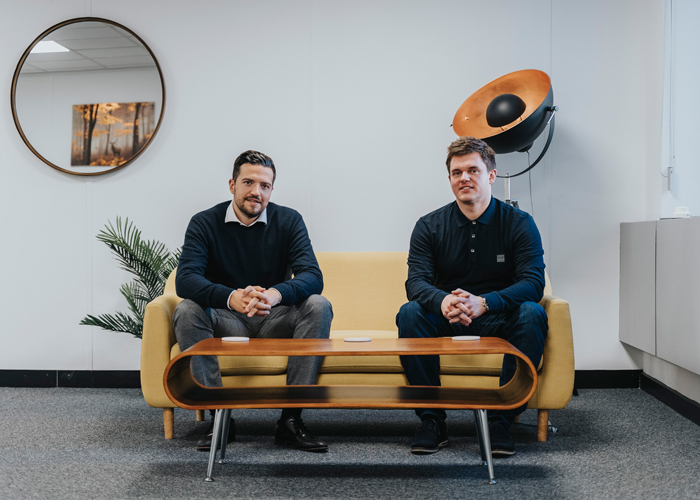 NEITHER Martin Welsh nor Kieran Taylor had set out to work in financial advice. But today, they are the proud owners of Aberdeen-based Welsh & Taylor Wealth, a partner practice of St. James’s Place, with several of their former colleagues from the oil and gas industry among their most loyal clients. Both are alumni of the St. James’s Place Financial Adviser Academy and are proving how people from a diversity of backgrounds are now thriving entrepreneurs in the financial advice market.

Both are very thankful for the start in life that the oil & gas industry provided. However, they knew that the opportunities & rewards of giving financial advice to clients were too good to pass up.

Martin Welsh was an engineer in Aberdeen’s oil and gas industry, often referred to as the “Oil Capital of Europe”. The number of jobs created by the energy industry in and around Aberdeen has been estimated at half a million. Martin worked on-shore for the projects and design side of the business.

After eight years in the business, he was made redundant in 2016, following a crash in oil prices.

Martin enjoyed his years in Oil & Gas, however, seeing the industry go through some tough times he realised he would never be in complete control of his future and was keen to look for something that would provide stability, and over which he would have more control.

Looking for inspiration for a new career, Martin went to a careers fair. He met the team from St. James’s Place Financial Adviser Academy.  It opened his eyes to the opportunity for people from a non-financial background to work in financial advice. It was the entrepreneurial side that attracted him the most, the idea of setting up his own business. And with family members as clients of St. James’s Place he had already seen first-hand the value of professional financial advice.

Kieran Taylor worked in the same industry as Martin locally.  While his job was a good one, he was becoming increasingly frustrated.

Kieran commented: “Working in oil and gas, you are at the mercy of a boom-and-bust cycle, which plays out time and again. Business would be good, only to crash a few years later.”

“I asked myself, did I want to link my whole future to the price of a commodity?  I wanted to get back some control.”

Kieran took the decision to speak to a recruitment specialist. His brief to the recruiter was that he was looking for a change and he had in mind that he wanted to do ‘something in finance’. He also had an ‘entrepreneurial itch’. The prospect of starting and building a business was very appealing.

A transfer of skills

Kieran and Martin came from similar backgrounds but had never met before they joined the St. James’s Place Financial Adviser Academy.

Martin joined the Academy aged 23 in 2016 and commenced a six-month course in Edinburgh. Kieran joined the next intake, again studying for six-months to qualify to give others financial advice.

Kieran commented: “Many of the candidates on my course were from a financial advice background. I was very much the odd one out in that respect, but it didn’t hinder me.”

“The move from working to studying again took a bit of adjustment, particularly around taking exams.  But I had a reasonable amount of business acumen, I am quite commercially minded and this was a huge advantage. I had also developed some good problem-solving skills in my days working in oil and gas and this is one of the fundamental requirements for an adviser – it’s what you do with clients every day.”

Martin added: “My previous experience was very much from the design side. So, the need to analyse and interpret information was something I was very comfortable with. I was also good at taking technical information and communicating it in a way that people would understand.  This would later become crucial when dealing with clients.”

Martin and Kieran agree that emotional intelligence was also an important attribute.

Kieran said: “It’s about listening and knowing how to deal with people. You need to read the room and adjust your style to put your client at ease. After all, you are asking them to disclose personal information about their finances. People will not do that with someone they don’t feel comfortable with.”

Martin and Kieran met after graduating from the St James’s Place Academy. They had both joined an existing practice, where they ‘cut their teeth’. But with so much in common and a desire to take control of their future, they decided to set up on their own.

It was important for Kieran and Martin that they build credibility. Having both started without a book of clients the early days were tough but with determination and hard work they started to successfully build their client base.

As it transpired, they needn’t have worried. Having a practice backed by a FTSE100 brand meant they could offer clients peace of mind and security. At first, they began advising friends, family and colleagues. Kieran and Martin remained in Aberdeen and their knowledge of local industry gave them a huge advantage. They came from the same area, had good contacts and understood the challenges and pitfalls of working in oil and gas.

Welsh & Taylor Wealth has been trading for two and a half years. Martin and Kieran now employ four support staff and have recently taken on another adviser, who incidentally also trained with the St James’s Place Academy.

Martin and Kieran have ambitions for the future. At 31 and 29, they believe that their youth can be an advantage and differentiator.

Martin commented: “We are not what I would describe as your typical financial advisers. We want to offer our clients something different from the old school. We bring a great deal of energy, and we are embracing technology as a business to provide a different kind of service.”

“We can offer our clients longevity – we can grow with them and remain a constant at different stages of their lives. People don’t want to start working with someone who is winding down to retirement.”

With around 650 clients on the books, they want to grow the business in a sustainable way.”

Martin continued: “For us, it’s not about being the biggest, but the best. We want to take on the right kind of client. We have a lean model, and we want to grow organically.”

Kieran and Martin have a great deal of pride in what they have achieved.

Kieran commented: “It’s humbling to look back. We are providing a great service to our clients and a great place to work. We have created something that others have benefited from, and this makes me incredibly proud.”

Martin concluded: “Setting up the business has been incredibly challenging at times but look how far we have come!  I feel like we have earned a better work-life balance. Running our own business, we now have control over our future and our earnings.”

“We are still a couple of young guys.  We love what we do and we are incredibly proud of what we have achieved.”