From EIE to exit﻿ – Seonaidh MacDonald 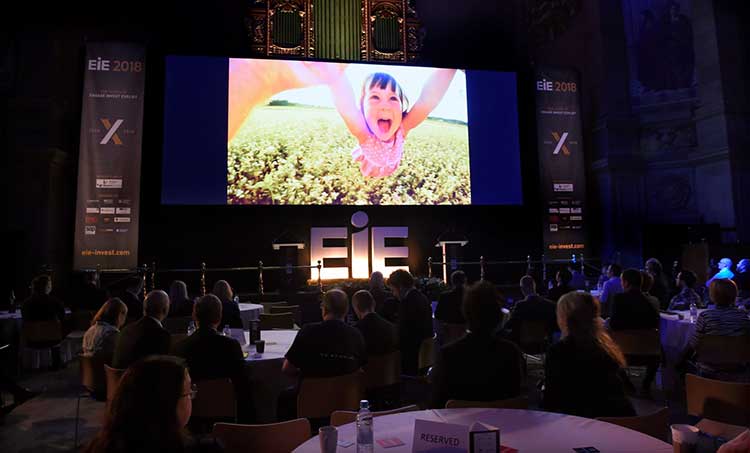 In 2016, Seonaidh MacDonald led his company mLED Ltd – a world leader in micro-displays for augmented and virtual reality products – through a hugely successful trade sale to a US tech giant.

A former EIE participant and now keynote speaker at this year’s event, Seonaidh shares his experience of how EIE contributed to mLED’s success and offers advice to companies pitching on 24 April in Edinburgh.

When did you first participate in EIE?

When I joined mLED as CEO in late 2013, they had considered applying for EIE in the past, but time constraints had prevented it. In 2014, with my extra pair of hands on board, we applied and were chosen to take part in the extended pitches. We were delighted to come runner-up in the final for Pitch of the Day.

The following year, EIE took 12 Scottish high-growth potential tech companies to London, mLED being one of them. This time we went one better and won Pitch of the Day!  My love affair with EIE began – there were so many useful things learned and helpful contacts made, during the two events.

What stage was your company at when you went through EIE?

mLED was a spin-out from the Institute of Photonics at the University of Strathclyde back in 2009, and although the company had been going for four years, we were still at a fairly immature pre-revenue stage. We had just closed an interim funding round of c.£600k, but had no major contracts signed, so were keeping a keen eye on cash flow.

What was the most impactful part of EIE and what role has it played in your success?

For me, the most useful aspect of EIE was the sheer volume and diversity of the investment community it opened up for us – not just the local Scottish investor groups but UK, European and even U.S. investors too. The visibility it gave us was great – suddenly people knew who we were and what we were about – plus winning Pitch of the Day helped.

Although ultimately, we didn’t get investment from the event, going through the EiE process and taking on board the feedback really helped me to refine my pitch, ironing out some unclear messaging. This was then put to very good use when we later began to pitch to investors further afield, in Silicon Valley.

So, what happened next for mLED after EIE?

Before EIE, we were primarily a medical devices company, but we quickly realised we were never going to get to the land of milk and honey if we carried on down that path, because we’d run out of money. So we took the brave decision to pivot out of medical devices and into wearables, specifically, creating products for the AR/VR micro display markets.

Suddenly we got a whole lot of interest from major US and Asian players, and we started to strengthen the team both in the U.S. and back here in Scotland. We put ‘boots on the ground’ in Silicon Valley, and with the help of some positive U.S. press, we started to make real progress there. In 2016, we entered into contract negotiations with a big social media giant – a household name. They took an interest because of our technology, our expertise and the interest from their competitors. During contract negotiations, their mergers and acquisitions team got in touch exploring whether they could just buy the company outright. Obviously, there was an intense period of negotiating around what that price could be but I’m delighted now I held my nerve throughout those negotiations.

In late 2016 we agreed to an incredible price which saw us acquired for a double-digit multiple of our value which made our investors and institutional shareholders very happy indeed. Despite an offer from the acquirer to work on for them for a period after the deal, I declined. It was time to do something different and start again, hence why I set up EOLAS Advisory Ltd to help others achieve a similar or better outcome, if that’s what they want.

As a clear EIE success story, what advice you would give to this year’s participants?

My advice is very simple – be clear what real market problem you are solving and please don’t just be creating ‘cool tech’ for the sake of it. If that market problem doesn’t exist, then you will struggle and just burn cash until it runs out. So, be honest with yourselves and make sure your technology really does fix it. After that it’s all about having the right team and flawless execution, so you get to product market fit as quickly as possible. Remember, time to market isn’t free and every day you’re not at market, you risk someone else stealing your breakfast. What are you waiting for, get on it… and good luck!

What’s your role at EIE this year and what will you be talking about?

I’ve been invited to do a ‘fireside chat’ with the host Quentin Cooper so hopefully that should be insightful or at the very least, interesting. I will give the audience my honest opinion on what actually is value creating (and what’s not), the need for global ambition, the need to be brave when focussing down on markets, strategic customer acquisition and “deal craft” for maximising the exit price you get.

From the day someone rocks up to you with a “deal”, to you finally closing a real deal, there are so many twists and turns, involving the need for deal craft – so many things to be alert to. It might be referred to as deal craft, but for me personally, it’s just games that people play. You must have the confidence to stand up to that or know how to leverage it to your own advantage.