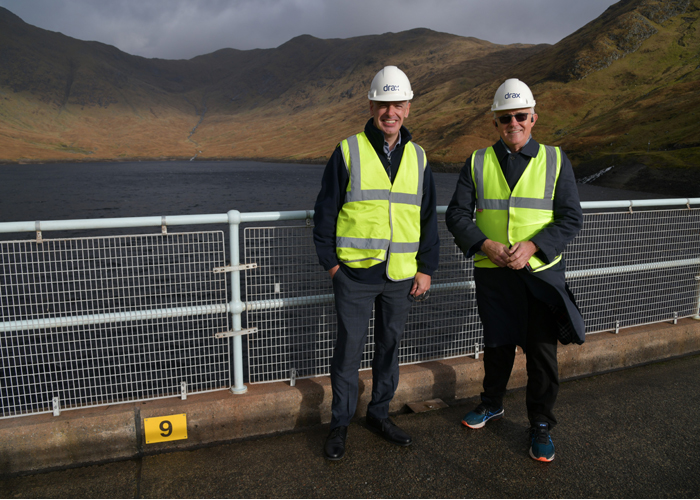 Its reversible turbines enable the plant to act like a giant water battery by pumping water from Loch Awe to an upper reservoir on the mountainside to store excess power from the grid. The stored water is then released back through the turbines to generate power quickly and reliably when demand increases.

This process helps stop wind farms being paid to turn off when they are generating excess power, helping Scotland to be greener whilst cutting household energy bills.

While visiting Cruachan, Mr Turnbull said: “Within the climate crisis the world is facing an ignored crisis – how to ensure that we do not fall back on fossil fuels when the wind isn’t blowing, and the sun isn’t shining. We need green energy security solutions. I commissioned the Snowy 2.0 Pumped Storage Hydro plant to prevent blackouts in Australia – the biggest such project in the southern hemisphere.

“It was fascinating to visit Drax’s Cruachan Power Station in Scotland. It reminds me that this is a tried and tested technology. With Drax’s expansion plans for the project it can also be modern and, with the right market focus on energy security and balance, affordable. The 5GW of such projects in the pipeline in Scotland are central to deliver a net zero energy system in the UK.”

Ian Kinnaird, Drax’s Scottish Assets Director, said: “We were very happy to welcome Mr Turnbull to Cruachan so he can see how this iconic power station is playing a critical role in balancing Britain’s power system and enabling more renewables to come online.

“Our exciting plans to more than double the generating capacity of Cruachan underlines Drax’s commitment to tackling the climate crisis and supporting the energy system as it continues to decarbonise. Expanding Cruachan will unlock more renewable electricity to power homes and businesses across the country, and support hundreds of new jobs in rural Scotland.”

Eddie Rich, CEO of the International Hydropower Association added: “No national electricity grid has been able to decarbonise without a significant element of hydropower. Projects like Cruachan demonstrate how easy it is to back-up our wind energy resources in the UK with other renewables. Gas is not the only storage option. As they say ‘water, wind and sun get the job done’. I hope to see other pumped storage come online in Scotland in the next decade.”

The expanded power station could be up and running as soon as 2030, subject to a successful planning application, with the project supporting around 900 jobs during construction.

The project will also require an updated policy and market support mechanism from the UK Government.

The existing lack of a framework for large-scale, long-duration storage means that private investment cannot currently be secured in new pumped storage hydro projects, with no new plants built anywhere in the UK since 1984 despite their critical role in decarbonisation.