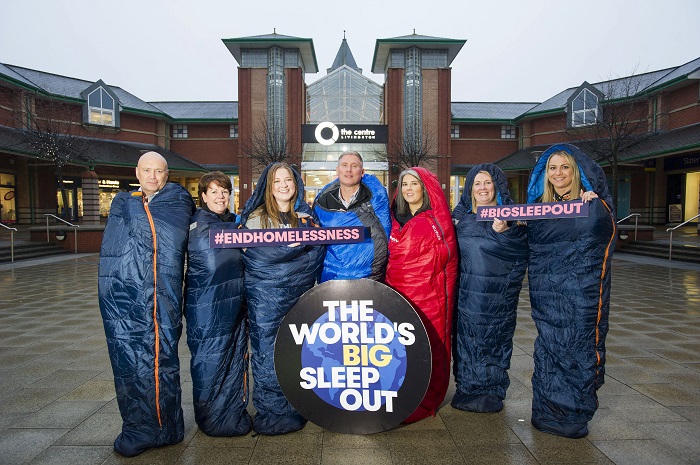 THE CENTRE, Livingston, which is one of the largest indoor shopping malls in Scotland, with over 180 shops and restaurants and visited by over 1.3m shoppers from around the country every month, has become the first mall in the UK to sign up and take part in Social Bite’s World’s Big Sleep Out (WBSO) on the 7th December.

Over 30 staff and family members, including Patrick Robbertze, Centre Director and Ashley Bisland, Deputy Centre Director, will brave the cold and camp outside the shopping centre on the night to raise money for Social Bite. The charity was founded by Josh Littlejohn and Alice Thompson in 2012, who are on a mission to eradicate homelessness across the world.

The World’s Big Sleep Out Trust, which Social Bite has partnered with, is a one-off global campaign, championed by Dame Helen Mirren and Will Smith, with over 50 cities worldwide taking part in major sleep out events.

Cities include New York, Brisbane, Madrid, LA and Edinburgh. Born out of Social Bite’s Sleep in the Park events over the last couple of years, the aim is to reach a target of 50,000 people sleeping out and raise $50m for charities locally and internationally.

Alice, who created the Wee Sleep Out in 2018, following demand from children who wanted to do their bit and sleep out everywhere from schools and back gardens to churches and community halls – which is taking place again this year alongside The World’s Big Sleep Out, said: “We are delighted The Centre, Livingston shopping centre has become the first mall in the UK to sign up and take part in the World’s Big Sleep Out and would encourage everyone to think about how they can take part in what will be an incredible event happening around the world with one aim – to eradicate homelessness globally.”

“We are delighted so many of the team have signed up for it and some of their family members too.”