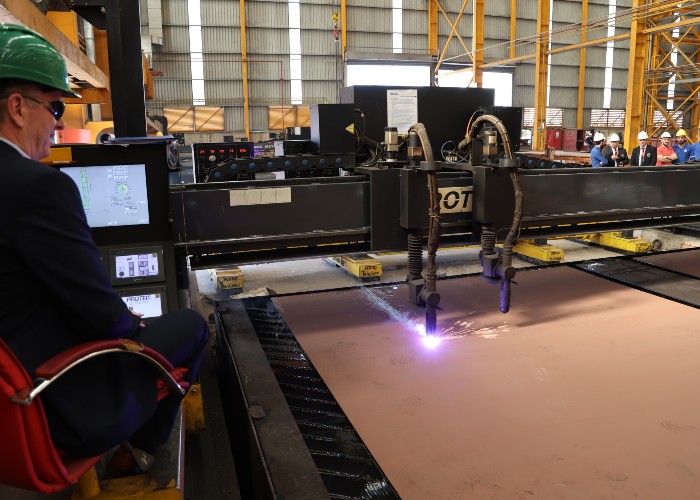 THE construction of two new ferries for Islay is officially underway after the first piece of steel was cut on Monday.

The steel-cutting ceremony took place at Cemre Marin Endustri shipyard in Turkey, where the two vessels are being built for Caledonian Maritime Assets Ltd (CMAL).

The new 94.8-metre, vehicle passenger ferries will each have capacity for up to 450 passengers and 100 cars or 14 commercial vehicles, providing a combined 40% increase in vehicle and freight capacity on the Islay routes and improving the overall resilience of the wider fleet.  Carbon reduction has been a key factor in vessel design and the new ferries are expected to deliver a significant reduction in emissions.

“This initial stage of the build will see the construction of the first blocks being carried out under cover, before being relocated to the slipway to be assembled in a process called keel laying.

“Work at the shipyard is progressing well; the team at Cemre is delivering each stage within the agreed timeline.  I’m sure this will be welcome news for island communities to see the build programme get underway for these much-needed vessels.”

The £91 million contract to build the two ferries was awarded by CMAL to Cemre Marin Endustri in Turkey in March 2022 after a competitive procurement process.  The first vessel is expected to be delivered by October 2024 and will enter service following sea trials and crew familiarisation.  The second vessel will follow in early 2025.

The Islay vessels form part of a 10-year programme of investment by CMAL, backed by £580 million from the Scottish Government for five years from 2021 to 2026.  Plans will deliver 21 new vessels for the fleet and multi-million-pound upgrade of harbour infrastructure over the next decade.  Further multi-million-pound investment will be needed to fund plans from 2026 onwards.