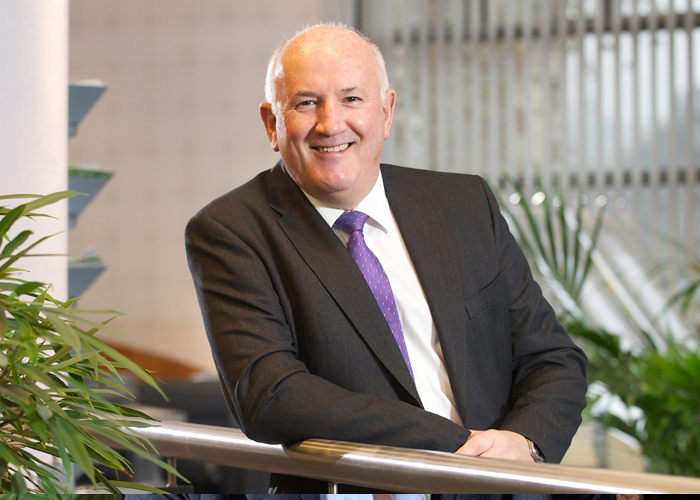 A PROMINENT entrepreneur behind the business which has dominated Scotland’s office equipment sector for over 40 years has died. Tom Flockhart was 73.

The father-of-four lost a short battle with cancer leaving his family, friends and colleagues in mourning.  He is survived by his four children Pamela, Stuart, Neil and Lynsey, seven grandchildren, and his partner Mandy.

An incredibly charismatic figure, Tom was proud of his modest roots as an adopted child growing up in a council house in Prestonpans, East Lothian.  He credited his upbringing and his school years at Preston Lodge High School with giving him the drive to go on and build his successful business empire – Capital Documents Solutions – the company he founded in 1979.

He always gave 110% to everything he did and, as well as being dedicated to his business, Tom was extremely proud and passionate about his family, friends, the arts and Scotland.

From family holidays with all of his children and grandchildren in Mull and Kingussie, to sailing trips with friends on the west coast and fishing on the North Esk and the Spey, he always made time for people and his energy, enthusiasm and love for life was infectious.

Fishing was a great passion of his and he was extremely good at it. With many parallels to his business life, he stuck at it even in the most unfavourable conditions and when other people had given up, he eventually succeeded.

He was also generous with his philanthropic activities, both financially and through the extensive network of connections he was willing to share, but remained low key about his support of many projects and causes over the decades.  He was passionate about his backing of the arts in Scotland, which saw him actively support the Royal Scottish National Orchestra, Edinburgh International Festival, Scottish Opera, and the Scottish Chamber Orchestra over many years.

Lynn Harrison, Tom’s PA for the past 17-years, said: “We are all in shock. To describe him as larger than life doesn’t do him justice. He was passionate, driven and once you met him, you certainly couldn’t forget him.”

From a young age Tom showed an entrepreneurial streak, working schoolboy jobs including gardening, paper rounds, fixing up old bikes and even selling sweets and haircuts to the other children in school.

He went on to complete an apprenticeship at Ferranti and gained an HND in Mechanical Engineering and would often jokingly recall how during his apprenticeship he was given his most important career advice when his boss advised him to get a job in sales. In 1970, he took that advice, securing a role with 3M selling photocopiers.

A naturally gifted salesman, by the age of 30 he had been 3M’s top copier salesman in the UK for three successive years and was determined to strike out on his own.  Using part of the proceeds from a house sale, he set up his own business, initially called Capital Copying Services in a small office in Montrose Terrace, Edinburgh and based on three abiding principles – “the best products, the best advice and the best after sales service and support”.

As it grew over 43 years from just three staff to over 200 employees, the firm’s name changed a few times to reflect the changes in the market and the wider range of products and services the business was providing whilst always staying true to the three founding principles.

Tom had a deep love for the company he built and the welfare and success of those who worked in it, and Capital Document Solutions is now Scotland’s largest independent supplier of office technology and a major employer with bases in Edinburgh, Glasgow, Dundee, Aberdeen, Inverness, and Lerwick in the Shetland Islands.

He thought nothing of getting up at 5am, driving to Inverness, working a full day there with the team, then driving back to Edinburgh at night. People asked why he didn’t slow down, but that wasn’t him.  This is what he loved.

Lynn said “He was working right up until the end, still going over documents and putting in his thoughts and ideas for a Scottish Government tender.”

Ironically those tender documents were part of the firm’s work on the Scottish Procurement Framework Agreement for Office Equipment – which only came into existence in 2009 after extensive lobbying by Tom. He demonstrated how Scottish-based firms were unable to bid for Scottish public sector contracts, leading to a significant change by the Scottish Government.

Earlier, in the 1990s, he also played a huge role in cleaning up the office equipment sector which was rife with bad practice and customer dissatisfaction. Tom worked with Edinburgh MP Nigel Griffiths to expose a major scam in the copier sector, which led to sweeping finance and leasing reforms and gave greater control and clarity to customers.

Lynn added: “For all of these reasons, even competitors are saddened by his loss as no-one could fail to respect what he did for the whole sector.”

His legacy is his passion for integrity and quality, which has been instilled in his family, and the culture at Capital.

Lynn said: “Tom was a remarkable man and was dedicated to sharing his knowledge, insights and what he had learned. Whether networking with business leaders, going back to Preston Lodge to give talks to pupils or running training for new salespeople, he was incredibly generous in giving his time and sharing his experiences.

“He never held back on that because he wanted people to get on, to have the tools to better themselves. He was never jealous or begrudged other people their success – he really admired people doing well. He was an outstanding motivator who helped shape the lives of so many people in so many different ways.

“While we are all feeling his loss profoundly, our thoughts are with his family at this very difficult time.”

Tom’s funeral will be held at Warriston Crematorium at 12pm on Tuesday May 10, followed by a celebration of his life at Prestonfield House Hotel from 2pm. Family flowers only.

His  family have received so many messages of condolence and comments about the impact or impression Tom made on so many people that they have set up a special email address to collect memories of him – 90TFmemories@gmail.com