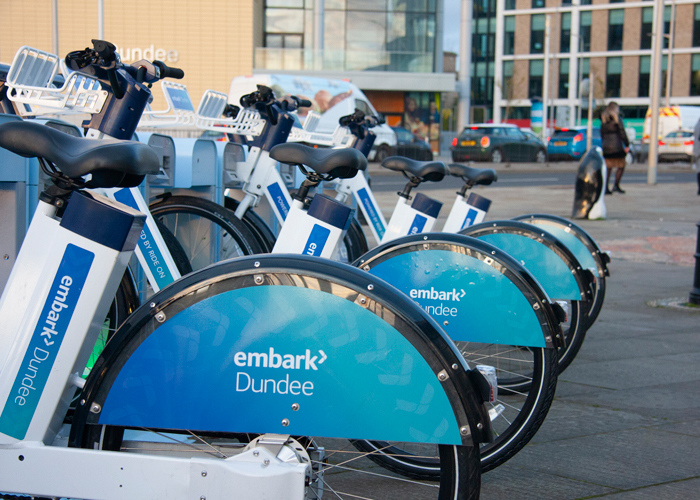 EMBARK Group (Embark) have marked the start of National Bike Week by releasing the latest data from Embark Dundee, the e-bike scheme they have sponsored since 2020. This follows on from the scheme’s extension and expansion, along with a recent recruitment drive, which reiterates Embark’s commitment to Dundee and its community.

The largest scheme of its kind in Scotland, Embark Dundee provides residents and visitors to the city access to eco-friendly, cost-efficient transport. Since its launch, the e-bikes have been used for over 25,000 trips by almost 20,000 different people. These journeys have covered over 135,000km, many of which might otherwise have been undertaken by polluting vehicles. This has saved a total 35,000kg of CO2 emissions, a large reduction for the local area, contributing to helping Dundee’s air stay clean.

Since its launch, the scheme has been of significant value to the local community, with 20 stations established across Dundee, and more planned for this year. Amid the current cost of living crisis, Ride On, the company behind the e-bikes, have also restructured their pricing to make Embark Dundee the city’s most cost-efficient mode of transport.

Embark’s commitment to the local area has also been underscored by its recent recruitment drive. This aims to recruit over 50 new employees from Dundee and the surrounding area, as it continues to build out its operations in the city. Once completed, it will make the Dundee office Embark’s largest in the UK with over 200 employees.

Peter Docherty, CEO, Embark Platform, commented: “These statistics highlight the positive impact that Embark Dundee has had on the community. We’re delighted to continue to be a part of this scheme, and remain committed to investing in Dundee and promoting active travel. We look forward to being part of the continued success of Embark Dundee as the year progresses.”

Brian Bellman, Dundee City Manager, Ride On, commented: “Ride On Scotland is proud to be the biggest e-bike scheme in the country. We are looking forward to the expansion of the number of stations we currently have in the very near future.”

“Recently installed stations are now in the heart of local communities, with some fantastic promotions currently on offer to all. These include a free monthly pass and £5 free credit to encourage new users to take advantage of the most cost-effective and sustainable transport solution in Dundee.”