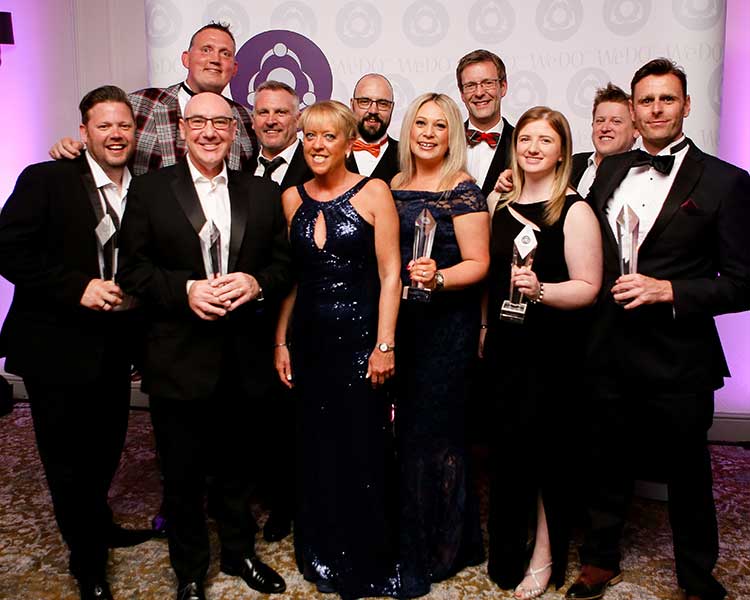 Doddie Weir was crowned Inspiring Leader of the Year for work with his charity My Name’5 Doddie Foundation.  The Foundation has granted £2.4 million of funding into research to find a cure for Motor Neuron Disease and gained global reach raising awareness of the disease which affects up to 5,000 adults in the UK at any one time.

The Lifetime Achievement Award was presented to Ricky Nicol of Edinburgh based Commsworld, one of the UK’s most successful and profitable Information & Communication Technologies services organisations.

Nicol describes the business as a “25 year old start up with a lot more to come.  We’re an innovator and a disruptor in a sector that’s been crying out for disruption for years.”

Teaming up with digital infrastructure provider CityFibre, Commsworld brought about a 150km fibre optic network that put Edinburgh on the map as a Gigabit City and has also been instrumental in helping Glasgow and Aberdeen gain the same status.

Entrepreneur of the Year – Andy Tait of rapidly expanding Greenacres Group which offers woodland burials and cremations as well as weddings.

Intrapreneur of the Year – Alex Brown of Livingston based Nordan UK  which has been supplying high performance windows and doors to the UK construction industry since 1981.

Young Entrepreneur of the Year – Andrew Johnstone of Loft Boarding Scotland based in West Lothian.

Scottish Product of the Year – Victoria Hamilton of Recoil Kneepads in Glasgow whose products are scientifically proven to reduce knee joint pressure by 76%.

Rising Star – Dave Hughes of novosound, manufacturers of high resolution ultrasound scanners in Motherwell, the first spin-out company to emerge from the University of the West of Scotland.

Belinda Roberts, founder of WeDO Scotland said:  “This year we received a record number of extremely high calibre entrants for our Awards highlighting the fantastic talent, innovation and variety of businesses across Scotland and beyond.  Our finalists go through a stringent and challenging 2 step process including a video submission and face-to-face panel interview with our judges, it’s not simply a tick in a box exercise.

“This year sees the widest range of sectors we’ve had in the 9 year history of our Awards which is a big positive and demonstrates that business in Scotland is thriving despite current economic and political challenges.  We congratulate all of our winners on their considerable achievements and look forward to following the next stages of their business journeys.”