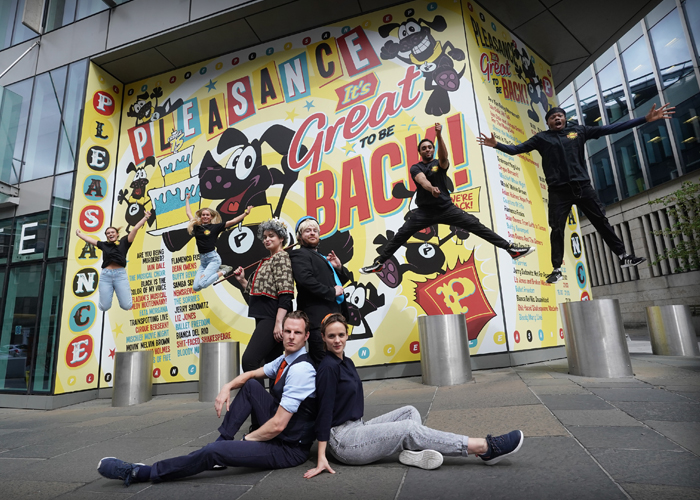 THE EICC and Festival Fringe partner, The Pleasance Theatre Trust, have launched an initiative to provide hundreds of Fringe tickets to local communities via a number of Edinburgh charities. The community ticket distribution scheme includes contributions from EICC’s catering partner, Leith’s, who will be providing complimentary refreshments to ticket holders, while the EICC and the Pleasance are supporting with ticket distribution.

EICC CEO Marshall Dallas said: “Our vision is to make our venue, which is one of the main venues for the Edinburgh Festival Fringe, as accessible to as many people within our local community as possible.  It’s also notable that, on the occasion of the Fringe’s 75th anniversary, inclusivity was one of the festival’s founding values.”

Anthony Alderson, Artist Director, Pleasance Theatre Trust, said: “As a charity, it’s imperative to us that we find ways to work with and support the local communities around our venue. The arts are such an important place to hear stories that wouldn’t often be told as well as spaces to provide sanctuaries for those who may need an escape from the everyday. I really hope this scheme will allow us to continue to broaden our audiences and welcome a whole host of people into these amazing shows.”

“We are delighted to receive tickets from the Edinburgh International Conference Centre and The Pleasance, this offering means lots of people from North Edinburgh are able to attend shows they normally wouldn’t be able to afford. We’ve built up a good relationship with the Conference Centre in the last few years and local people are excited to attend the festival this year.”

Claire Ritchie, Chief Operating Officer, Eric Liddell Community, said: “We are delighted to be partnering with the EICC on this initiative. Here, at The Eric Liddell Community our vision is to live in a community where no one feels lonely or isolated and initiatives like this help us to bring people together in their local communities to enjoy an event they might not otherwise have access to. We know that people living with dementia and carers are particularly at risk of loneliness and social exclusion and are therefore extremely grateful for this support from the EICC to help further enhance the support we offer these groups.”

Invisible Cities CEO, Zakia Moulaoui Guery, said: “We are very proud to have partnered with EICC to be able to facilitate the distribution of tickets through our own partners. Everyone deserves to enjoy the Fringe and discover shows from around the world. The demand for tickets was great as we are all excited to see the return of events!”

Audiences to Pleasance at EICC this August will be able to enjoy shows including Cirque Berserk!, Ballet Freedom by the Freedom Ballet of Ukraine, Black is the Colour of My Voice with Aoife Campbell, NewsRevue – the World’s longest running comedy show, and local Edinburgh musicians – The Sorries.

The Pleasance announced its original partnership with the EICC in 2017, with the partnership enabling the Pleasance to programme some of the most technically challenging shows at the Fringe, including shows that would not otherwise be possible without the space and facilities afforded by the EICC.