EICC on track for record number of events in 2019 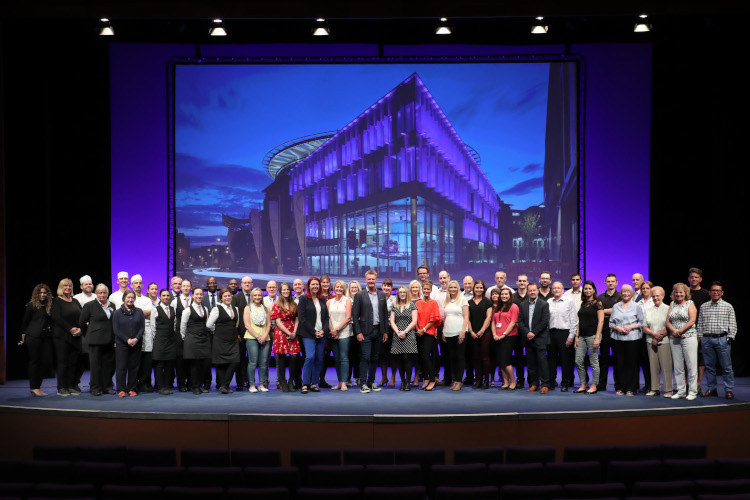 The EICC team at the venue

THE EDINBURGH International Conference Centre (EICC) is on track for achieving record sales and operating profits in 2019 after hosting some of the world’s most high profile conferences during the year and negotiating industry, business and political challenges.  As Scotland’s top conference centre approaches the end of the year, the economic impact is expected to exceed £55 million while supporting around 1,800 jobs.  The venue is also on track to host a record number of events in 2019, with 217 being the latest estimate.

EICC Chief Executive Marshall Dallas said: “While more than ever in 2019, in the face of widespread business and political uncertainties and increasing international competition, the EICC has had to be commercially astute, it’s also part of our raison d’être to support local businesses across the city.  This is a really important factor to us because we would not be as successful a conference centre without the network of city partners who add significant value to our overall proposition.”

Hosting TEDSummit, which was the result of an extended bid process against a number of the world’s leading conference destinations, for what is considered a ‘trophy’ event in the global conference industry, was among the EICC’s operating highlights in 2019.  Marshall Dallas added: “The benefits of hosting TEDSummit this year go beyond tourism, positioning Edinburgh and Scotland on the world stage as a place to meet and to be inspired. Our vision, ‘to create an environment which inspires ideas that change the world’, is closely aligned to TED’s own vision of ‘Ideas Worth Spreading’, and it was these shared values, together with the collaborative spirit of our city partners which made a strong case for Edinburgh to host TEDSummit.”

One of the EICC’s recently formed partnerships is with Edinburgh BioQuarter, which saw an announcement in October regarding a tie-up aimed at bringing more UK and global medicine and life sciences conferences to Edinburgh while helping to build Edinburgh BioQuarter’s pipeline of innovative companies and expertise.

Looking ahead to 2020, the EICC is set to announce a number of initiatives positioned to further improve the venue’s competitive offering.  Marshall Dallas said: “As we move into a new decade, and our 25th year of operating, we look forward to setting out a number of fresh ambitions.  The three areas under active consideration are sustainability, business development and education, areas we know will strengthen our position in the global events industry, and we hope to make a number of related announcements in early 2020.”

Giving back to the local community where the EICC operates remains high on the venue team’s agenda and last month, on World Kindness Day, they opened a large-scale food collection point, resulting in the collection of 169kg of essential food items, which equates to over 150 meals. This December marks the second year running of the EICC collecting food and other essential items in support of the Edinburgh Food Project – part of the Trussell Trust network of food banks which provides emergency food parcels to people living in food poverty. Also this month, for the third consecutive year, the EICC welcomed over 100 residents from seven local Dementia and elderly care homes for a festive afternoon with refreshments, music from the Forget me Notes Choir and a screening of On Moonlight Bay.