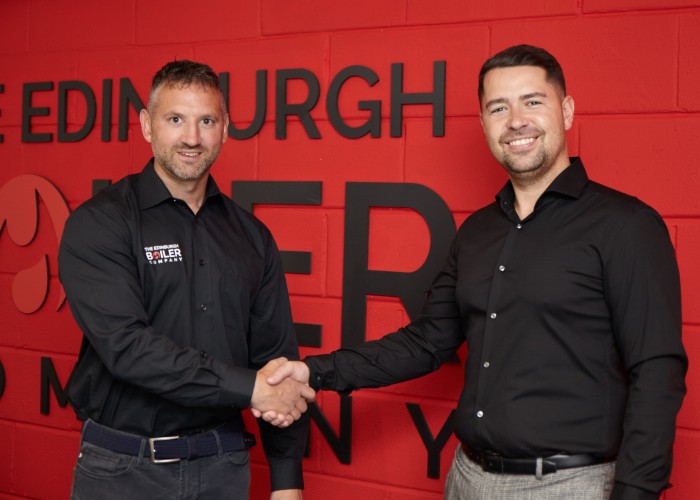 THE Edinburgh Boiler Company (EBC) has continued its growth plan with the appointment of Dougie Bell as its first Operations Director.

Dougie was most recently with Ideal Heating and brings a wealth of experience to the new role having worked in the industry for 19 years, holding senior positions in both sales and management.

Managing director Mark Glasgow says the new addition to the staff will play an integral part in the company’s continued development.

“I’ve known Dougie for a long time now and he is one of the most professional people I have come across,” said Mark, who founded EBC in 2015.

“He has great experience in the heating industry and has many great attributes that suit this role. The main one is being able to lead a team and for me this is where he’ll really come into his own.

“Having that operational experience in coordinating and mobilising teams will be a real asset to us. He’ll bring stability and leadership to the role and I’m delighted to have him on board.

“It’s an exciting time at EBC with lots of plans in the pipeline and I’m sure that’s one of the main reasons we could attract someone of his calibre.”

Dougie, 39, comes from Galashiels and he said: “I’ve known Mark since he started the Edinburgh Boiler Company from basically a shed in his back garden a number of years ago.

“I’ve watched his progress since then as he has grown the business and have belief in what he is doing and where he is wanting to go.

“He’s not one to ever stand still and is always thinking ahead and I really like the ambition he has.

“He has an outstanding team behind him and I’m delighted to be part of it. I am really looking forward to helping ensure the business is running as well as it can be and, in the process, helping it grow further.”

Part of Dougie’s remit will be designing specific training programmes for apprentices looking to benefit from the Energy Training Academy, which EBC is running in tandem with HeatFix Scotland.

“I love the concept of the academy, which is going to give youngsters the chance to join our industry, which is constantly evolving, and that’s a great thing,” he said.

“Renewable energy is going to play a huge part in our industry and I’m excited at the prospect of helping educate youngsters about more low carbon heating alternatives.”