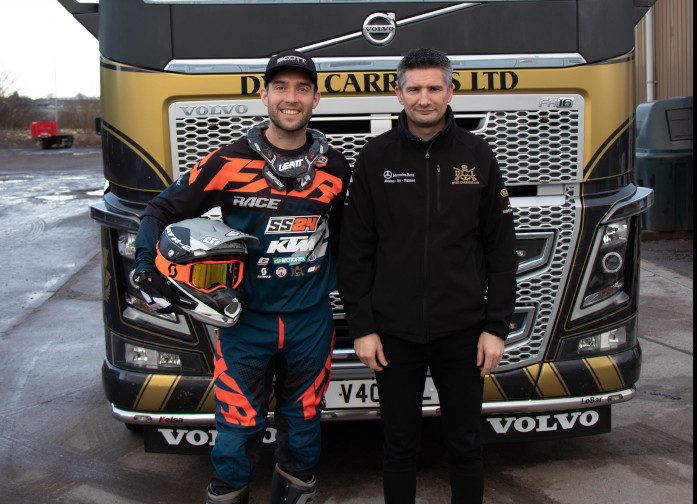 DYCE Carriers have announced that they will be sponsoring Motocross star, Shaun Simpson’s latest venture, as he embarks on running and managing and his own team for the first time.

Shaun has been racing since childhood, becoming Scottish Motocross champion at just age 13 and participating in his first world championship the day after finishing his final exams at 16. He then went on to become three-time British Champion and has won four Grand Prix, as well as representing Great Britain in the Motocross of Nations.

After a series of problems involving his bike caused him major setbacks, Shaun decided that striking out on his own, and developing a team that raced his way, was the best approach for moving forward. Despite his enthusiasm and determination to forge his own path, finding the sponsorship for a new team was a daunting task.

Joining Shaun in a new partnership, managing directors of Dyce Carriers, Jason and Candie Moir, who are also passionate moto-cross fans, have stepped in to provide Shaun with the support he needs to strike out on his own.

Growing up, both Jason and Candie were fans of Shaun’s father, seasoned Moto-Cross Grand Prix racer, Willie Simpson. Back in 2012 they started personally sponsoring Shaun and since then have become close friends, as they took holiday’s following Shaun around the international race circuit and bonding over the often intense and visceral experiences that Moto-Cross can bring.

Setting out on this new prospect, Shaun said “I’m really excited to run my own team and get back to what it’s all about, putting in the work, racing hard, and getting around the track in the fastest time possible”

“The support that Jason and Candie have given me has been incredible, without people like them, that are passionate about the sport, none of this would be possible”

Jason added, “Motocross has been a passion of mine my whole life, so we couldn’t be happier to sponsor Shaun and help him make his dream a reality.”

“His desire to put the focus back on the bike riders, putting in the work and getting the job done, that’s a message that really resonates with the ethos of Dyce Carriers.”