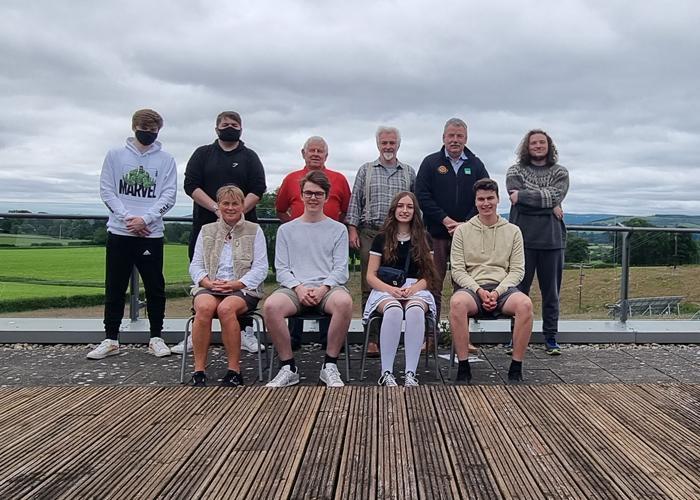 The Dumfries and Galloway College team

AS PART of the Making More of the Coast project, an initiative created by the Rotary Club of Dumfries Devorgilla and Solway Firth Partnership (SFP), students from Dumfries and Galloway College (DGC) were asked to create a series of materials to raise awareness of plastic pollution on beaches on the Solway Coast.

This is not the first time that Rotary and SFP have collaborated with DGC.

Last academic year the College’s contribution to the project was submitted to, and was successful in, the coveted UK and Ireland Green Gown Awards.

This year the team of fourteen students designed and created animations and posters that will be used to frame and support educational materials which have been designed by SFP.

This project has been funded by grants provided by Rotary Foundation and Rotary Clubs in Dumfries and Galloway.

Charles Milroy of Rotary, Nic Coombey of SFP and Penny Humphreys of DGC came up with the title of year’s theme, A Plastic Adventure.

Students were challenged to produce a story about a piece of plastic, typical of those found on the beaches of Dumfries and Galloway.

They were briefed to be limited only by their imaginations but with a single caveat of their work to be designed for a primary school audience.

The creative students met the clients from the Rotary Club of Dumfries Devorgilla and Solway Firth Partnership for a project briefing online and used technology along with their skills and experience to put together their thoughts and materials.

Students had to give a mid-project briefing on their progress to Charles and Nic, as though they were delivering an update to commercial clients.

They were given feedback and encouragement on their initial submissions to help them deliver a more complete product at the end of the project.

On completion students presented their work to a panel of judges who assessed their presentation and animations on technical merit, adherence to the brief and appeal to the target audience.

To replicate the commercial world, students were informed that their submissions were part of a competition, with prizes provided by Rotary.

An official award ceremony will be held at a later date.

The standard of work was extremely high and Charles Milroy of Rotary commented that:

“Suki Shek’s winning animation set a very high standard last year. The panel was delighted to see that this year’s students really understood the need to tailor their message to their young target audience.”

“A well done to Sean, Eilidh, Torrin, and Finlay for their success in their final submissions and to the other students who submitted such thought-provoking work.”

“A special thank you to Penny Humphreys who was the encouraging force to students throughout. We look forward to working with DGC and SFP in the future.”

Their work will also be shown on social media and at a webinar held by the Marine Plastics project as well as already featuring at the Bang Goes the D&G event and Dark Space Planetarium on 8 June as part of World Oceans Day.

Dumfries and Galloway College sends its congratulations to all the students involved in this project and thanks to The Rotary Club of Dumfries Devorgilla and Solway Firth Partnership for providing this opportunity to them.

Principal Joanna Campbell said: “Our contribution to the Making the Most of the Coast project was a huge success and I’m delighted to see its important work continue. All the students involved in this project have done a fantastic job and they should be proud of what they’ve achieved. My thanks go to them, their teaching staff, and to Rotary Club of Dumfries Devorgilla and Solway Firth Partnership for making this project possible.”