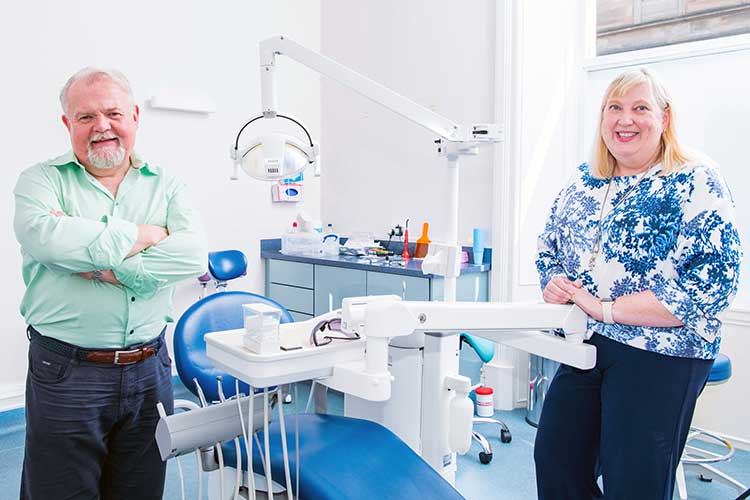 An ambitious dental group is on target to double in size this year – which would see it running more than 50 practices across Scotland.

Since being launched in 2015 with its first acquisition of seven dental practices, Clyde Munro Dental Group has grown quickly. It has added four new practices in the past month alone meaning it now operates 26 across the country.

Now it aims to acquire an average of two new practices per month and expects to have added 24 further practices by the end of the year.

Jim Hall, founder and Chief Executive of the group, said: “The feedback we hear continually is that dentists love the idea of an entirely Scottish-based and Scottish-focused dental group.

“We also hear repeatedly about the importance of retaining strong local roots and that is exactly what we are about, which explains one of the major reasons we are growing so fast. It is a very exciting time to be part of Clyde Munro.”

“While we’ve come a long way already, we currently have another 19 practices on heads of terms and in discussions with a number of others. We are confident that they will also be part of our group by the end of the year.”

Clyde Munro was launched by entrepreneur Mr Hall, who co-founded investment firm, Kelvin Capital. After buying over the seven-strong practices which made up the Clyde Group, he rebranded and refocused the business, raising an initial £20m in funding.

As well as being backed by both private equity firm Synova Captial and Investec Bank, the firm also has industry heavyweight Steve Duncan as its Chairman. During a distinguished career, Mr Duncan was the executive chairman of Alliance Boots’ health and beauty division.

As part of a drive to create the best possible team, former Bupa executive Kirsty Dace was recently unveiled as a new director of Clyde Munro, along with the appointment of renowned Scottish dentist Dr Jacqui Frederick as Group Clinical Director. Both appointments were highly credible in the sector.

Jacqui and Kirsty join the senior management team which also includes Fiona Wood, Chief Operating Officer and who was employee number four with the firm, and Sheena Beckwith, who is Chief Financial Officer.

The aim is for Clyde Munro to operate an expanding network of family dentists across Scotland, with each practice devoted to providing the best dental care, while reflecting the needs and character of its community.

The company’s goal is to be Scotland’s ‘local dentist’ and it has signalled its intention to continue acquiring more practices. Local practices will retain the names and identities they have built over many years, while enjoying the benefits of being part of a bigger group.

With its current 25 practices it already employs more than 100 clinicians and treats at least 200,000 patients.

Mr Hall added: “We are Scottish-based, we have a distinctly Scottish team and we are not looking outside of Scotland. That absolutely sets us apart from the competition.

“Another differentiator is that dentists who are looking to sell – whether they are retiring or simply refocusing – can deal directly with us. I meet them all and we tailor the best possible package for them around what they want to achieve.

“We are thrilled with the feedback we are receiving from the sector. We have an outstanding reputation and we are seen as a company that invests in patients and communities, in training and in the advances of digital dentistry.”

Practices which join the group benefit from help with business functions including HR, accounts, marketing, compliance and facilities management – relieving many of the headaches which plague dentists. Group practices also enjoy greater buying power and enhanced access to new treatments and software, as well as superior training opportunities.

Mr Hall added: “There are up to 700 practices in Scotland which might fit the bill for joining Clyde Munro, so the scope for continued growth is outstanding.

“However, we will not become a ‘one size fits all’ corporate. We will continue to do what is right for each practice, each team and each community. Indeed, that’s one reason why we don’t rebrand practices or force them to change name.”