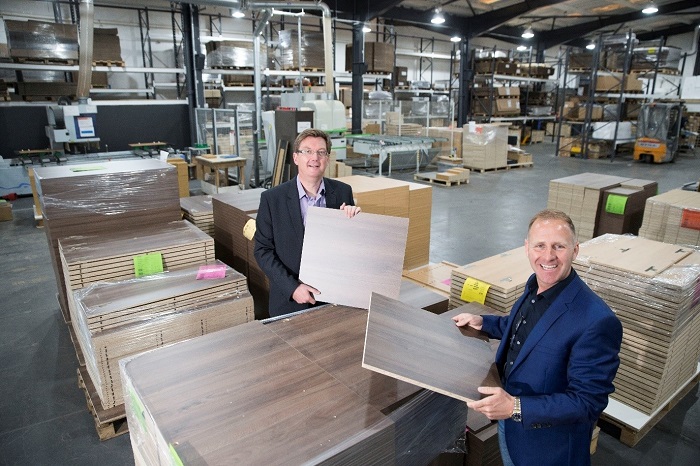 A CUMBERNAULD-based furniture business is set to expand once again after receiving a six-figure loan from UKSE.

Aquapac Ltd, which specialises in the manufacturing of furniture products, plans to expand its design and engineering team by 50%, which will assist them in servicing additional projects and allow the firm to enter continue their successful expansion into new market sectors.

Aquapac produces wooden furniture products for hotels and offices and is traditionally known for its bespoke aquarium and vivarium cabinets.

Since moving into a custom 50,000 ft factory in 2017, Aquapac been increasing capacity and expanding into new sectors including contract furniture, kitchens, and case goods creating an increased workload for the firm’s expert team of designers and engineers.

The student accommodation sector is now the company’s biggest growing revenue stream with Aquapac recently manufacturing cabinets & beds for 600 halls of residence bedrooms at the University of Surrey with modern furniture.

This is the fourth round of funding provided to the company by UKSE, a subsidiary of Tata Steel, since 2007. Previous funding helped the firm with their move, along with investing in production equipment. The new wave of funding will also assist in purchasing state-of-the-art software and equipment, including a beam saw, a CNC machine and robotic storage.

Since establishing in 1995, Aquapac have increased employee count from 16 to 40, and increasing turnover by 300%. Earlier this year, the firm’s financial achievements were recognised with the Growth award at Citi Foundation Microentrepreneurship Awards.

Stephen Connachan, managing director of Aquapac Ltd, said: “I’m really proud of the team we’ve grown at Aquapac Ltd. Without the help from UKSE, we wouldn’t have been able to expand so rapidly.

“UKSE has been one of our biggest supporters, and thanks to its backing, we’ve been able to progress and develop the company into something very special.” Scott Webb, regional executive at UKSE said: “We’ve worked with Aquapac for a number of years and we’ve been very impressed with the way in which they have grown, carving out a marketplace for themselves. We’re looking forward to seeing what’s in store for the firm in the future.”