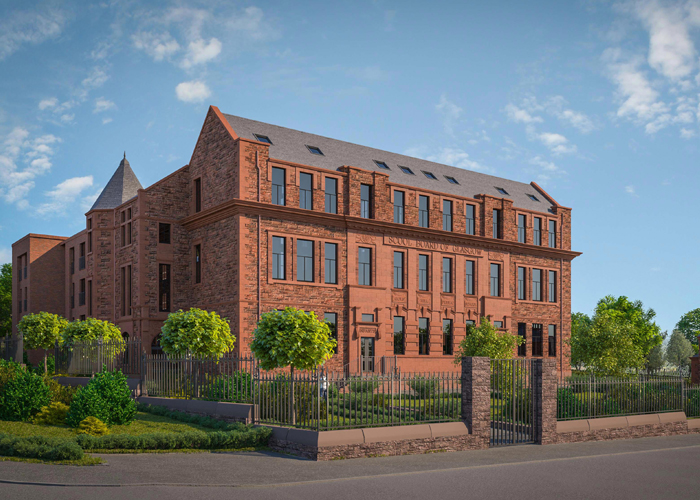 A cgi of the proposed look of the redevelopment

CONSENT to demolish all but the façade and a number of key architectural features of B-listed Golfhill School and to build in its place 130 stunning new flats in Dennistoun’s Circus Drive, just a short walk from Glasgow city centre, has been given the go-ahead by city planners.

The B-listed Golfhill School, close to Glasgow Royal Infirmary, is mostly beyond repair and once demolished will be the focal point of a sympathetic new development by local property developer, Barony Homes Limited.

The planning application had set out the company’s desire to “preserve and enhance the setting of the listed building and structures”, but “years of groundwater action had resulted in severe structural movement and partial collapse, which ultimately led to the abandonment of the building for the purposes for which it was constructed.”

It continued: “Whilst demolition would have been an obvious answer, the opportunity for cross-subsidy funding from the new-build development on the adjoining site enabled a strategy for a facade retention of the principal southern elevation and the key architectural features of the east and west flanks to the octagonal towers.”

The school building, which was designed by architect Alexander Nesbit Paterson, on behalf of the Glasgow School Board, was opened in 1902 and has been on the “buildings at risk” register since 2010.

The new development, a tenemental style mix of blocks, will see a total of 134 flats, built in three phases, on the school grounds complete with car parking, plus green spaces, including orchards, and paths across the site which will connect adjacent roads.

William Roddie, director of family-owned Spectrum Properties, parent company of Barony Homes Limited, said: “We are delighted that we are now breaking ground on this important new development for the Dennistoun area which will offer the best of modern living with bright, open plan living space and quality homes in one of the city’s most vibrant and diverse areas.”

“Our plans will create areas which are desirable to both new and existing residents to pass through and linger in, an improvement on the overgrown and unsafe areas which currently exist on site.”

The Circus Drive development, sales of which will be carried out by Savills, is the latest transformational scheme by Spectrum Properties, which has had a tangible impact on the built environment of the city by saving and re-purposing architecturally pleasing properties.

Although Spectrum has moved into residential development in the last 10 years, its primary focus remains on commercial property. It owns some 700 commercial properties across the city, comprising 70% of its group holdings.

Mr Roddie said: “The Golfhill School site had been closed because of subsidence and had lain unused for some 12 years before we bought it nearly four years ago.”

“It is a substantial task to retain what can be salvaged of the building, including expensive and technically challenging façade retention but, as a local company, we feel an obligation to the people of Dennistoun to maintain a link to a history which means so much to so many people.”